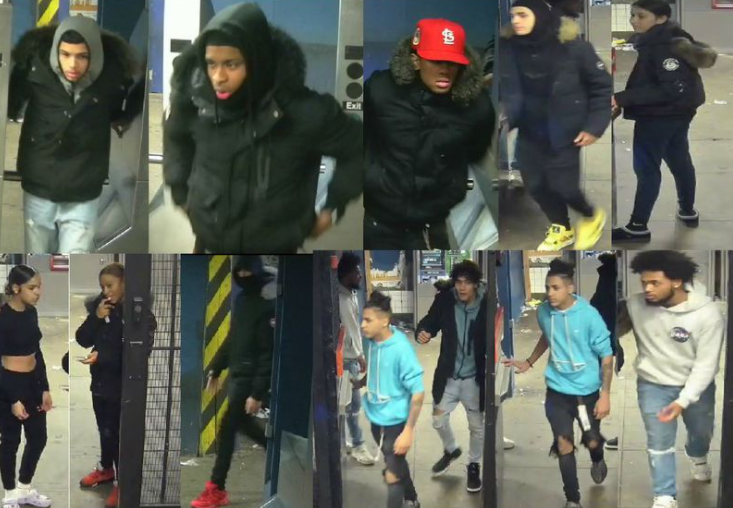 Two teens have been charged with murder for their role in the New Year’s morning death of a Good Samaritan struck by a train while trying to help a drunken man blowing a noisemaker, police said Friday.

The male suspects, a 17-year-old and a 16-year-old, surrendered at different Bronx precincts Wednesday with family members, police said. They were charged with murder, manslaughter and assault. Their names were not released because of their ages.

Nine others, including three teen girls, are still being sought.

The fatal confrontation happened at the Fordham Road station in Fordham Heights at about 2:45 a.m. on New Year’s Day.

Police said the group got angry with a drunken 38-year-old man who was wandering around the platform and blowing on a noisemaker to celebrate the start of the new year.

An argument erupted, police said, and the man was attacked, punched and kicked repeatedly, with one of the teens, who is still at large, pulling a knife.

As a D train entered the station the man fell to the tracks and fractured his arm.

That’s when Roland Hueston tried to help, leaning over the edge of the platform in an attempt to get the motorman to stop the train.

But the train struck Hueston, whose left leg was pinned between the platform and the train. He died at the scene.

“He died the way he lived, helping people,” said Hueston’s mother, Milicent. “There is no greater love than this, that a man lay down his life for his fellow man.

The drunken straphanger was treated at St. Barnabas Hospital and released. He told police he has no recollection of how he got back onto the platform.