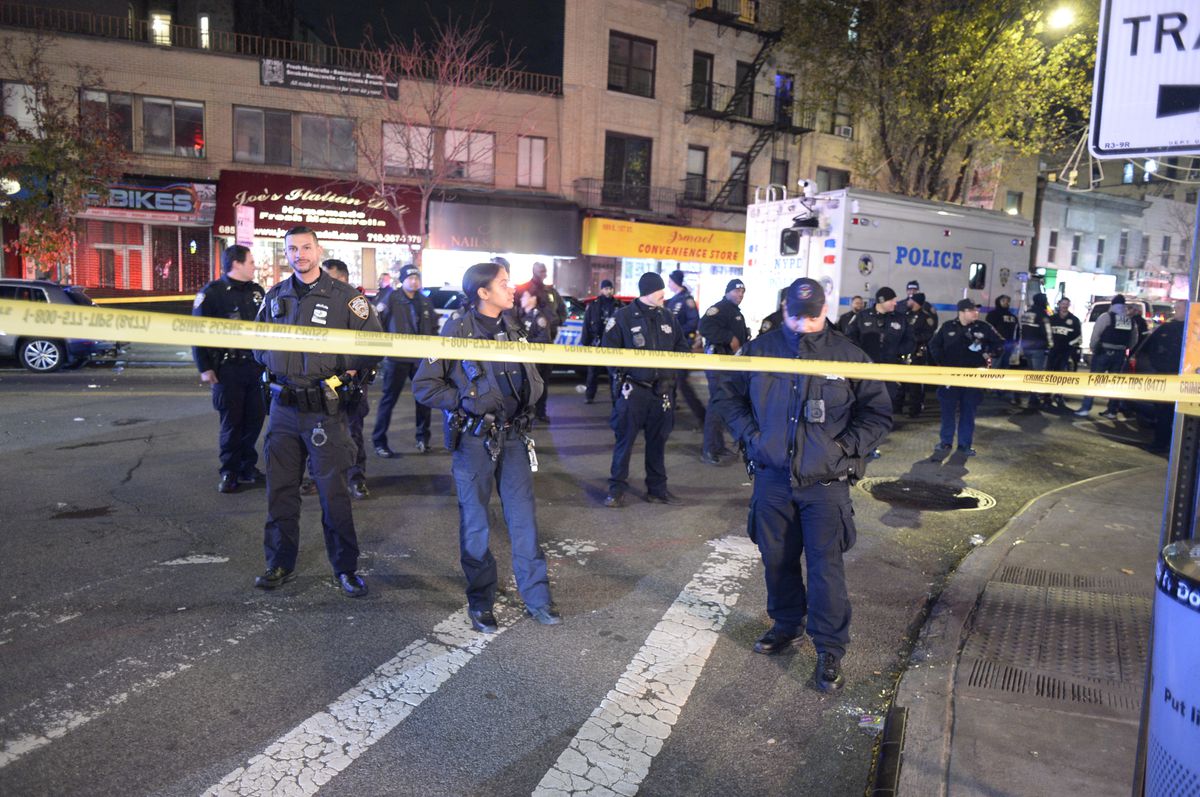 Two police officers were shot and wounded in a bloody confrontation with a gunman in the Bronx Wednesday night, authorities said.

The officers were responding to a 911 call for a person with a gun about 8 p.m. near E. 187th St. and Beaumont Ave. in Belmont.

When Officers Alejandra Jacobs and Robert Holmes arrived, they found Charlie Vasquez, 23, of Greenpoint, Brooklyn, sitting on the stoop of an apartment building, police said.

He matched the description from the 911 call “to a T,” NYPD Commissioner Dermot Shea said at a late-night news conference. “Within seconds, they are involved in a gun battle,” he said.

Holmes asked Vasquez to take his hands out of his pocket, and Vasquez immediately pulled out a gun.

“The individual stands up, the gun comes out, and shots are fired. It all happens in a second,” Shea said. “What strikes you as you watch that video is the speed in which it happens and the no regard for human life.”

Vasquez fired four shots, hitting Jacobs twice in the right arm. But Jacobs — a U.S. Air Force reservist with just a year on the force — returned fire, striking him in the chest with three of her five shots, cops said.

One of Vasquez’s bullets hit eight-year veteran Holmes in the right armpit area and came out his left chest, cops said.

Both officers — assigned to patrol in the 48th Precinct — were taken to St. Barnabas Hospital and were expected to recover.

The suspect was also shot and was in serious condition after surgery. He’s expected to face criminal charges, Shea said.

“We saw something in visiting in these officers — extraordinary courage on display tonight,” Mayor de Blasio said. “They were not thinking about themselves. Even though they had bullet wounds, all they could talk about their commitment to keeping people safe, why they came on this job…. It was incredibly inspiring. I just want to give thanks.”

A Bronx cab driver on his way to get something to eat told reporters he watched the clash unfold.

“The cops went straight for him,” the cabbie, who did not want to be identified, recounted. “Two groups of shots, about nine altogether. He was on the ground, face up, shot right here in the side.”

He added Jacobs’ fellow officers grabbed her “and ran her around the corner. The male cop kept saying ‘I’m hit, I’m hit.’”

The cabbie said he also watched as responding officers stood up the cuffed gunman. “He said something to them and they slammed him back down,” the cabbie said. “The crowd was going crazy.”

Shea said the suspect’s gun was reported stolen from Georgia a year ago, and he referred to the shooter as a career criminal with nine past arrests.

Sources said his most recent arrest was for drug possession in 2019. Vasquez also faced weapon possession charges in 2017 ad 2019, the sources said.

Police Benevolent Association President Patrick Lynch called his visit to the wounded officers in the hospital a grim “holiday tradition,” recalling the Christmas Eve 2020 shooting of Officer Connor Boalick, who was saved by his bullet-resistant vest after he was attacked responding to a domestic violence call in Brooklyn.

Please pray for the recovery of the two officers who were shot in my neighborhood of Belmont. We must fully support the next Mayor, @ericadamsfornyc, as he seeks to crush the epidemic of violence that has taken hold in the Bronx and elsewhere in the City. https://t.co/lKPfI9NqfN

The wild encounter came amid a troubling trend of gun violence in the Bronx.

That’s a sharp contrast with the city as a whole, which has seen a 1.2% decrease in homicides this year, and just a 2.2 % increase in shooting incidents.

The latest encounter erupted just an hour and a half after two men in a stolen Jeep ran over a police officer in Brooklyn, breaking his leg.

The driver and a passenger were traveling on E. 83rd St. and Farragut Road in Canarsie about 6:30 p.m. when officers with the 69th Precinct ran the vehicle’s plate and realized it was reported stolen, police said.

The cops tried to stop the Jeep, but the driver floored it, dragging one of the officers and breaking his leg.

The Jeep then sped north on E. 83rd St., and veered into a shared driveway between two buildings crashing into a gate. The driver and passenger ran off, and remained at large late Wednesday.

“There was a crash, and the car went into the gate,” said a 73-year-old woman who’s lived on the block for the past 26 years. “It was busier than the Belt Parkway back there.”

The officer went to Kings County Hospital in stable condition.