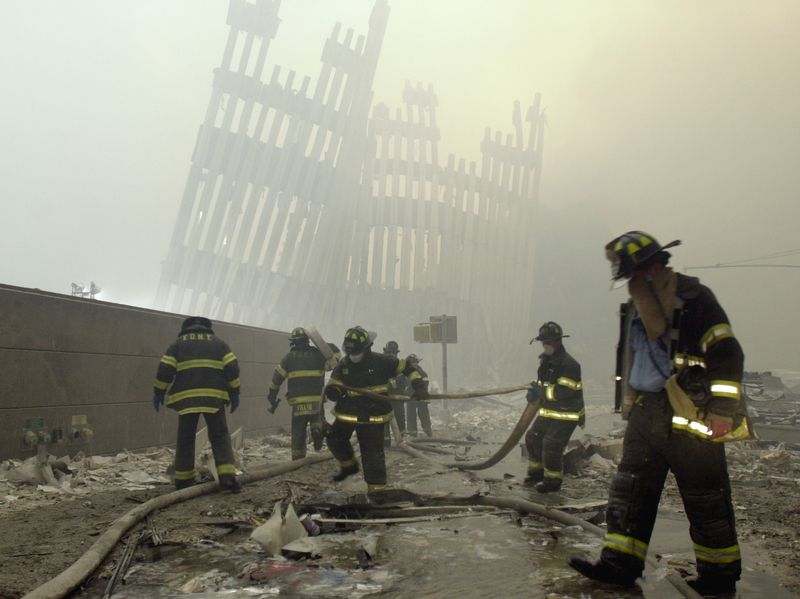 In the 19 years since Sept. 11, 2001, the mantra among surviving World Trade Center first responders was always the same: Never forget.

Now some of those heroes who spent weeks digging through the toxic rubble of the twin towers are at risk of losing their memories to dementia linked to their time working at Ground Zero, according to a pair of new studies by Stony Brook University researchers.

“It is very ironic,” said Dr. Benjamin Luft, director of the Stony Brook WTC Health and Wellness Program, who partnered with Dr. Sean Clouston on the projects. “We’re looking at a responder community, covered in the toxic dust that covered lower Manhattan. It really gives us pause.”

The first study’s findings, to be presented virtually Tuesday at the Alzheimer Association’s International Conference, used MRI imaging to assess the brain’s gray matter thickness in participating first responders. The researchers discovered a dangerous thinning of the gray matter, with evidence the responders’ “brain age” is about 10 years older on average than the typical person of the same age.

The second study, among 181 male 9/11 first responders with an average age of 55, found changes in their blood proteins consistent with Alzheimer’s and other neuropsychiatric conditions.

“Listen, I run into it every day,” said first responder and activist John Feal. “People call us for help, and their memory is a little foggy or they don’t remember certain details. We know cancer is still killing people. Now let’s see if dementia rears its ugly head.”

Clouston says the research into the dementia issue began about five years ago, leading to the two latest studies. The brain scans involved patients between the ages of 45 and 65, where brain atrophy is rare in the general population.

“What’s different about this one is we put people into the MRI, and it allowed us to take a look at the structure of the responder’s brain,” he said. “We measured the thickness of gray matter all around the brain. And people who had some symptoms of cognitive impairment had substantially thinner gray matter.”

For many of those afflicted, self-diagnosis is not easy.

“People often mistake dementia for something else,” explained Clouston. “It’s hard to notice if your memory is missing. Instead, people just don’t show up at things. People call and ask, ‘Where were you?’ It’s something that can be misread. It’s really crucial for us top understand what the actual symptoms are.”

Feal — who recently survived a COVID-19 infection that knocked him for a loop — said the results could help those with potential issues by identifying the problems and giving those afflicted a chance to deal medically with the issues.

“Nobody wants to be told they have cancer, that they have dementia,” he said. “But if these are the tests we have to take, I’m all for it. ”