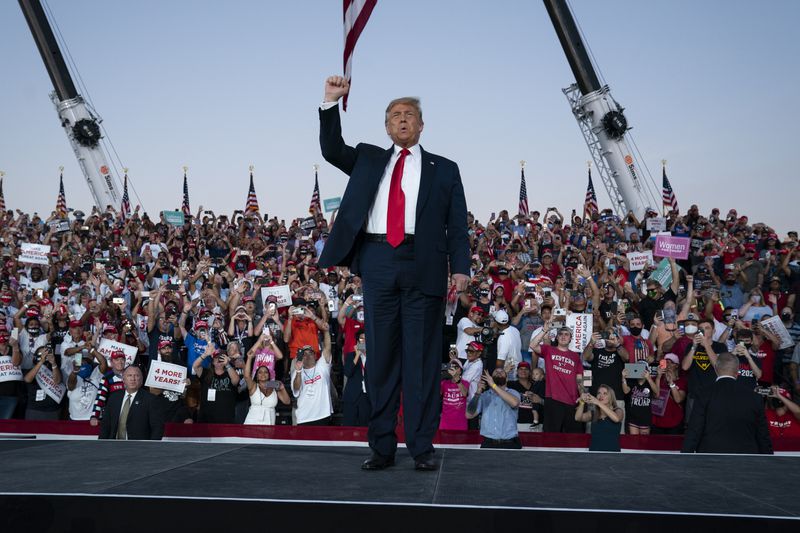 President Trump told supporters in Florida on Monday night that he wanted to give all of them “a big fat kiss” after falsely insisting he has developed immunity against the coronavirus.

“I went through it and now they say I’m immune. I feel so powerful. I’ll walk in there, I’ll kiss everyone in that audience,” Trump said on stage in Sanford, Fla., during his first campaign rally since being diagnosed with the virus on Oct. 1. “I’ll kiss the guys and the beautiful women, just give you a big fat kiss.”

Trump’s reckless claims run counter to guidance from federal public health agencies, including the Centers for Disease Control and Prevention.

The CDC says there’s no evidence that immunity can be developed to COVID-19.

In fact, the CDC says it should be assumed that immunity is not possible, since researchers have found people can catch the deadly virus more than once.

But Trump — who did not wear a mask for his raucous return to the campaign trail — urged his supporters at the Monday night rally to “get out” more, as the U.S. coronavirus death toll surged above 215,000.

Trump’s resumption of in-person campaigning comes despite concerns that he could still be contagious.

The CDC says COVID-19 patients who suffer severe symptoms — which Trump did — can be contagious for “up to 20 days.”

Still, Dr. Sean Conley, Trump’s personal physician, released a memo ahead of the rally claiming the president “is not infectious to others.”

Conley said he arrived at that assessment after Trump tested negative recently “on consecutive days,” though he didn’t specify what that meant, sparking confusion about the timing of the alleged test results.

Trump plans to hold campaign rallies nearly every day of this week in a number of critical battleground states with just three weeks to go until the Nov. 3 election.

Besides making false claims about COVID-19 immunity, Trump spent a large chunk of the rally describing Biden as a “puppet” of radical left forces, even though the former vice president holds distinctly centrist views on most policy fronts.

“These people are crazy. We have to win,” Trump said. “Biden has handed control to the socialists, the Marxists and the left-wing extremists.”