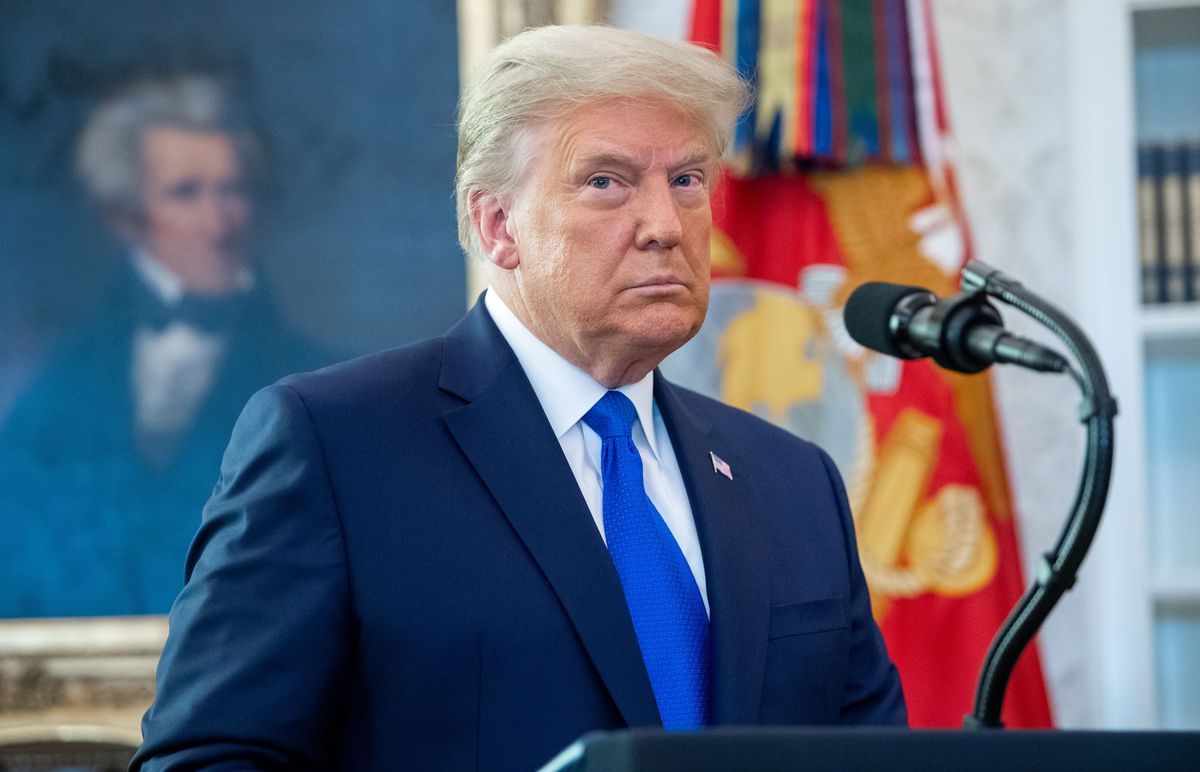 President Trump is putting Republicans through a loyalty test.

With less than a month left in office, Trump this week vetoed a bipartisan defense bill and called on Congress to issue four-figure coronavirus stimulus checks to most Americans — backing GOP lawmakers into a corner where they either have to break with him or set aside their ideological principles.

Trump issued the veto of the typically uncontroversial National Defense Authorization Act on Wednesday, citing a couple of issues that are largely unrelated to the U.S. armed forces.

Trump’s first reason was that the annual $741 billion bill didn’t include his requested repeal of Section 230 of the Communications Decency Act, an obscure piece of internet law that shields social media companies like Twitter from certain legal action.

Second, Trump said he pulled out the veto card because he’s not happy that the NDAA includes an amendment mandating the renaming of U.S. military bases honoring Confederate leaders like Robert E. Lee.

But the veto — which puts off 3% pay raises for American troops and authorization for a slate of military programs and construction projects — may not hold.

The NDAA passed both the House and the Senate by veto-proof majorities earlier this month, and GOP honchos like Senate Majority Leader Mitch McConnell (R-Ky.) warned Trump they’d likely override him if he blocked the bill because they don’t think it should serve as a vehicle for what appears to be his personal priorities.

House Speaker Nancy Pelosi (D-Calif.) said Trump’s veto “endangers our security” and vowed to host an override vote in her chamber on Monday. McConnell did not immediately divulge his plans, though he urged his caucus earlier this month to maintain the nearly six-decade-long tradition of approving the annual military legislation without hiccups.

At the same time, Trump threw a major wrench into the long-delayed push for more coronavirus relief late Tuesday when he announced he would not sign a $900 billion stimulus package passed by the Senate and the House because he considered the measure’s $600 direct payments to most U.S. taxpayers too modest.

Instead, Trump said in a video posted on Twitter that he wants the bill to bankroll $2,000 stimulus checks — an idea Republicans have long opposed, but one that Democrats pounced on.

“Glad to see the president is willing to support our legislation,” Rep. Alexandria Ocasio-Cortez (D-N.Y.) tweeted. “We can pass $2K checks this week if the Senate GOP agrees to stand down.”

Pelosi, also a big supporter of larger stimulus payments, vowed to force a unanimous consent vote Thursday on amending the stimulus package so that it includes $2,000 personal checks.

That puts House Republicans in an uncomfortable position where they either have to block the fast-track vote — likely drawing Trump’s ire in the process — or swallow their partisan pride and join the Democrats in voting for $2,000 payouts.

House Minority Leader Kevin McCarthy (R-Calif.), usually a die-hard Trump loyalist, did not respond to requests for comment on what he plans to do. McConnell, an adamant opponent of any major stimulus spending, also didn’t offer any statement on Trump’s relief package shakeup.

Trump’s legislative pressure campaign on Republicans comes as he’s furious with many of them for not doing more to help him overturn President-elect Joe Biden’s election. He’s particularly angry with McConnell, who has instructed his caucus to not entertain a Trump demand to rescind the Electoral College results when Congress meets for a joint session on Jan. 6.

Back on the military spending bill front, Trump insisted in a letter to congressional brass that repealing Section 230 is a matter of national security because the law “facilitates the spread of foreign disinformation online.”

Section 230 protects Facebook and Twitter from being held legally responsible for content posted on their platforms, and some Republicans agree with Trump that the law should be scrapped, in large part because they’re angry that the social media companies are fact-checking the president’s false claims about the election.

However, very few Republicans agree that the traditionally bipartisan military legislation should be used as a cudgel to crush Section 230.

Republicans had hoped Trump would sign the $900 billion stimulus bill — the only deal Congress was able to reach after nearly nine months of negotiations — so that they could head home for the holidays.

But now lawmakers will likely be stuck on Capitol Hill.

Meantime, the federal government will shut down Monday unless a deal is made, since lawmakers attached an annual $1.4 trillion omnibus spending bill to the stimulus package they sent to Trump’s desk.

As lawmakers scrambled to figure out what to do with the NDAA and the stimulus, Trump left the White House on Wednesday afternoon to spend Christmas at his private beach club in south Florida.

But he did not appear to feel the spirit of the season as he kept railing against fellow Republicans for rebuffing his desperate bid to subvert his election loss.

“After seeing the massive Voter Fraud in the 2020 Presidential Election, I disagree with anyone that thinks a strong, fast, and fair Special Counsel is not needed,” Trump tweeted from Air Force One, apparently in response to his outgoing Attorney General William Barr’s rejection of such a request. “This was the most corrupt election in the history of our Country, and it must be closely examined!”