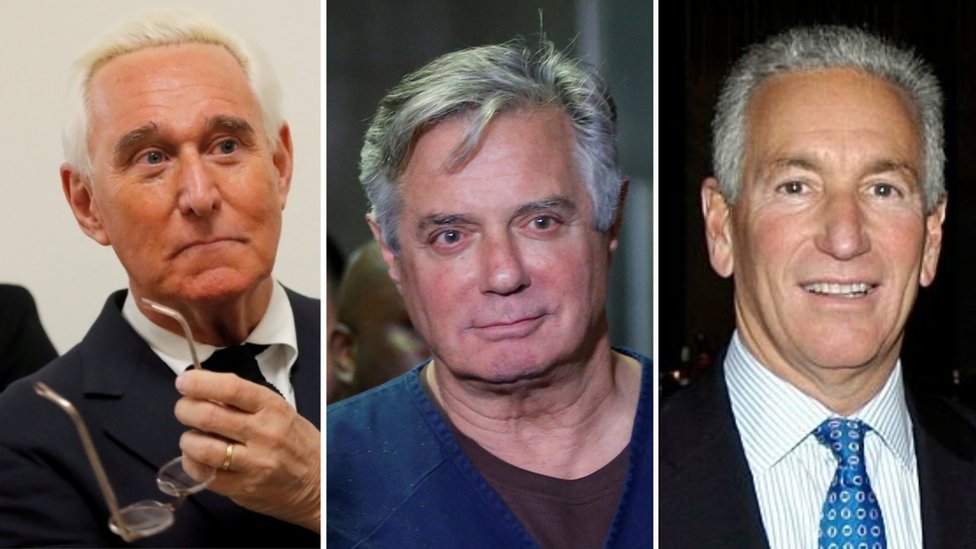 Have yourself a merry little pardon.

The latest batch of executive clemencies included a total of 26 pardons and three sentence commutations.

Among the other pardon recipients were Rog­­er Stone, the longtime Trump confidante who already got his three-year prison sentence commuted by the president this summer, and Charles Kushner, the father of Trump’s son-in-law, who spent two years in prison after being convicted of tax evasion and witness tampering in 2005.

Manafort, who is two years into a seven-year prison stint for a laundry list of financial crimes uncovered by Mueller’s probe, praised Trump for the pre-Christmas pardon.

“My family and I humbly thank you,” Manafort said in a statement provided by his attorney. “History will record that your presidency accomplished more in four years than any of your modern-day predecessors.”

Manafort’s conviction was the most high-profile one secured by Mueller’s inquiry into the Trump campaign’s ties to Russian operatives who interfered in the 2016 election to sabotage Hillary Clinton’s White House bid. His relatively substantial prison sentence was in part a result of his refusal to cooperate with Mueller’s investigators, including his mysterious unwillingness to explain why he shared internal Trump campaign polling data with an accused Russian spy.

“The pardons from this president are what you would expect to get if you gave the pardon power to a mob boss,” Weissmann tweeted.

Manafort’s not completely out of the woods; he still faces a state indictment in New York on crimes that cannot be covered by a presidential pardon.

“This action underscores the urgent need to hold Mr. Manafort accountable for his crimes against the people of New York as alleged in our indictment, and we will continue to pursue our appellate remedies,” said Danny Frost, a spokesman for Manhattan District Attorney Cy Vance Jr., who’s leading that prosecution.

Stone was convicted of obstructing Mueller’s investigation and intimidating a witness in the probe.

He has been a free man since Trump commuted his entire three-year sentence in July a few days before he was supposed to report to prison. The pardon cleans his criminal record.

“I was subjected in a Soviet-style show trial on politically-motivated charges,” Stone said in a lengthy statement.

Charles Kushner, whose son Jared Kushner works as a senior White House adviser to Trump, did not immediately react to the pardon announcement.

Kushner’s sleazy crimes, which included a scheme to blackmail his brother-in-law with a prostitute, were prosecuted by former New Jersey Gov. Chris Christie. The ex-Republican governor has called Kushner’s conviction “one of the most loathsome, disgusting” indictments he produced during his tenure as U.S. attorney in the Garden State.

Earlier this year, Trump also pardoned Michael Flynn, his former national security adviser who pleaded guilty twice to lying to the FBI about his 2016 contacts with a Russian government official.

The only Trump associates convicted by Mueller who haven’t received pardons are ex-personal attorney Michael Cohen and ex-deputy campaign manager Rick Gates, both of whom cooperated extensively in the special counsel investigation.

“What happened tonight shows how broken the whole criminal justice system is,” Cohen tweeted. “All these criminals receive pardons. This is wrong!”

Trump’s spree of pardons comes as his presidency is drawing to an end.

He’s been rumored to be considering preemptive pardons for Rudy Giuliani, his three adult children and even himself amid speculation that they could face indictments in New York and elsewhere once the Trump presidency’s over on Jan. 20.

Critics have raised concern that Trump’s fast-and-loose pardon practices could do lasting damage to the American justice system.

“Once one party allows the pardon power to become a tool of criminal enterprise, its danger to democracy outweighs its utility as an instrument of justice,” tweeted Sen. Chris Murphy (D-Conn.). “It’s time to remove the pardon power from the Constitution.”