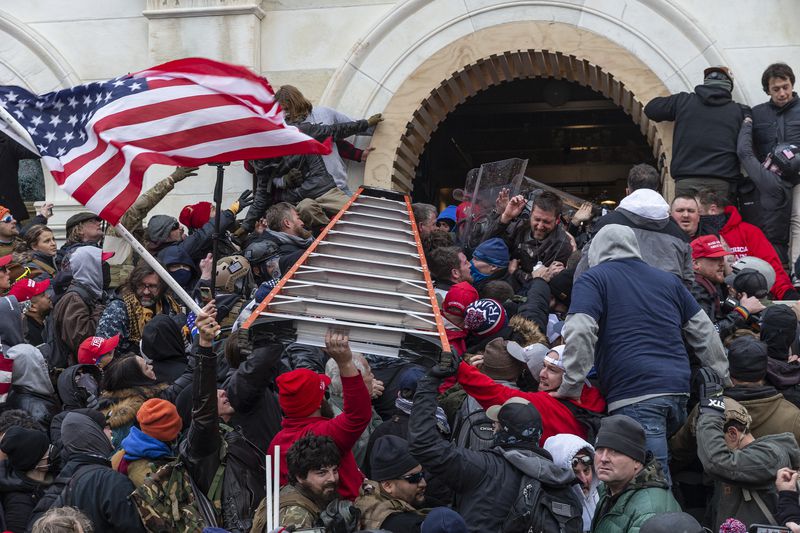 This Trump-crazy trio doesn’t rank among Washington’s best or brightest.

Three of the president’s riotous supporters, including a newly-elected West Virginia politician, faced charges federal Saturday for their high-profile appearances in the U.S. Capitol riots that left five people dead.

Each of the president’s men was photographed or caught on video during Wednesday’s violent insurrection after Trump delivered a two-hour harangue insisting his loss to President-elect Joe Biden came in a rigged election.

Two became literal poster boys for the despicable event: One for walking off with House Speaker Nancy Pelosi’s official lectern, the other for posing shirtless while seated in Vice President Mike Pence’s chair on the Senate floor.

The third, politician Derrick Evans, was busted in part when investigators compared his voice on a live-streamed video from the Capitol with his voice-over from a campaign ad, according to court documents.

“Our house! Our house!” Evans shouts in the Capitol video.

Adam Johnson, the giddy Florida man snapped while lugging the lectern with the speaker’s seal during the wild Wednesday rampage, wasn’t laughing Saturday.

Johnson, 36, of Bradenton, Fla., was taken into custody shortly after 9 p.m. Friday and held without bail on a warrant issued by federal marshals, authorities said.

Johnson, the father of five, was photographed while gleefully toting the lectern through the Capitol in the midst of Wednesday’s rioting — with the photo instantly going viral.

He also posed while wearing a “TRUMP” ski cap for a second photo alongside a sign reading “Closed to all tours” inside the building, authorities said.

But there’s more: According to court documents, Chansley actually called the FBI’s Washington Field Office to confirm he was the bizarrely-clad man seen sitting in Pence’s seat.

Authorities also noted he was carrying a 6-foot spear festooned with an American flag tied just below the blade.

The self-proclaimed shaman said he was under the sway of Trump when he traveled from Arizona to the nation’s capital, answering the president’s request for all “patriots” to attend the rally-turned-riot, court papers alleged..

“We’re in, we’re in!” shouted the law-breaking lawmaker two days before his Friday arrest. “Derrick Evans is in the Capitol!”

Evans, who issued a post-riot statement Wednesday claiming went to the Capitol “as an independent member of the media to film history,” had previously revealed his true motivation on social media, officials said.

“This is why we’re are going to DC #StopTheSteal,” he wrote hours before the rioting, in a retweet of a Trump tweet claiming 4,000 bogus ballots were found in Fulton County, Ga.

One rioter was shot dead by Capitol Police, one police officer was killed by rioters, and three other demonstrators died during the violence fomented by Trump in the first assault on the Capitol since a British attack in 1814.