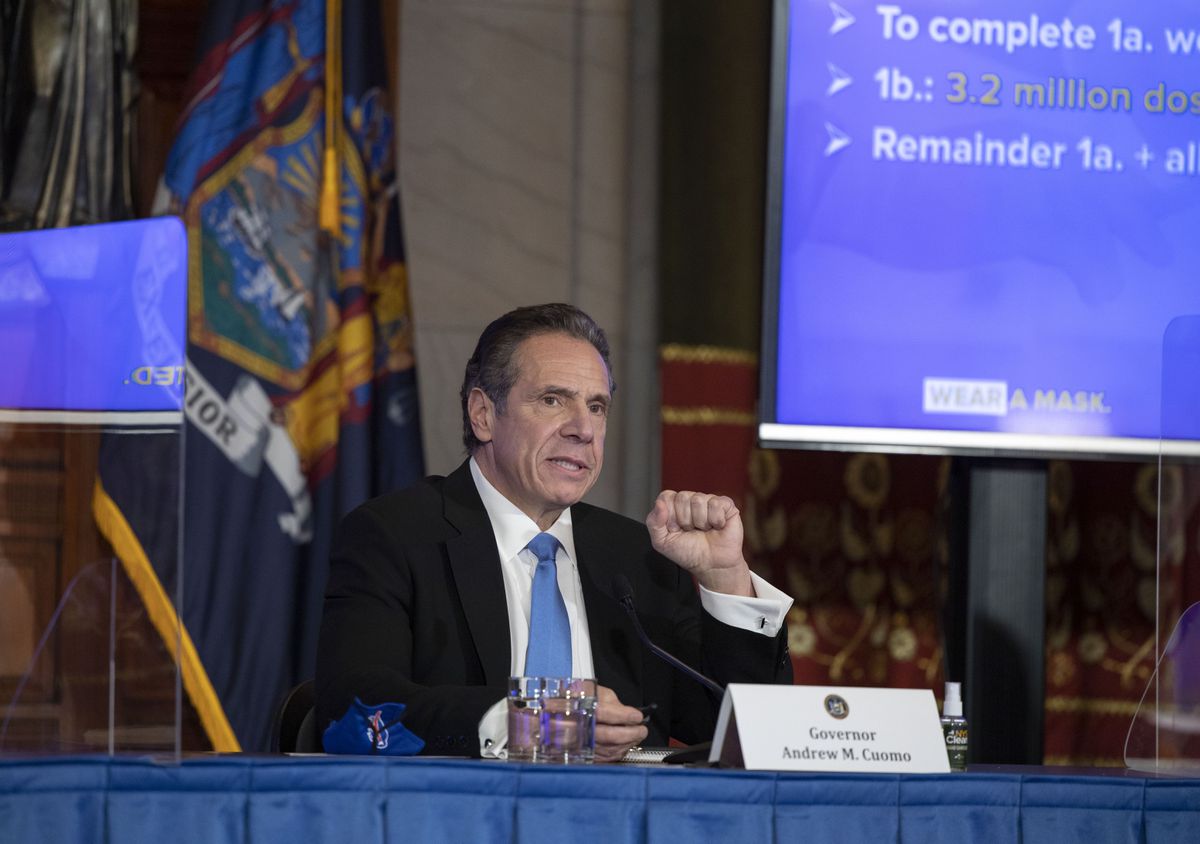 A 64-year-old Massapequa, L.I. man was diagnosed with the dreaded strain on Friday, the governor said.

Experts say the U.K. variant is more transmissible than the coronavirus strain already wreaking havoc in the United States.

The Long Island man was one of three New Yorkers who tested positive for the new variant on Friday, bringing the total number of infected in the state to four.

Two additional cases of the British strain were found in Saratoga Springs, where the first New York case was announced on Monday.

The Long Island case is not connected with the Saratoga Springs cluster, Cuomo said.

The Long Island resident was diagnosed with COVID-19 through a private lab on Dec. 27. The sample was sent to the Wadsworth Center in Albany for further testing where it was identified as the U.K. strain, officials said.

The state Department of Health is working with contact tracers in Long Island to identify any other potential exposures to the British strain, said state officials.

Fifty-five people have now been infected with the virulent strain across the country.

“This is a situation where the federal government was asleep at the switch,” Cuomo said Saturday. “A bunch of countries tested for it when it surfaced and New York required testing for the UK variant, but the nation did nothing.”

The Saratoga Springs cluster centered around a worker at N. Fox Jewelers — although the employee, who’s in his 60s, hadn’t traveled abroad, officials said.

Five other store employees tested positive for COVID-19, but only two — the ones diagnosed Friday — had the U.K. strain, officials said.

The Wadsworth Center has been testing for the new strain since it was discovered weeks ago. So far, more than 400 people have been screened for the U.K. variant, officials said.

While the variant is no more deadly than COVID-19 and does not lead to worse symptoms, it can be a problem if hospitals become overwhelmed, officials said.

The state infection rate was at 6.5% Friday — down from 7.7% — with 188 state residents dying of COVID complications on Friday, Cuomo said.

New York City had an infection rate of 6.2% on Friday, while the Mohawk Valley, Finger Lakes and Long Island all had infections rate of over 9%, officials said.

Cuomo announced that vaccinations will expand to all public employees, including police officers and teachers, and residents over 75 on Monday — but vaccinating that many people could take about 14 weeks.

“Just because reservations (for these groups) will become available, don’t expect everyone will get a reservation,” Cuomo said, encouraging unions and municipalities to “prioritize certain workers in your work force” to get the vaccine first.

“Prioritizing older teachers, teachers in classrooms, teachers in communities with higher infection rates,” Cuomo said. “That’s what the public employee unions should be thinking about.”