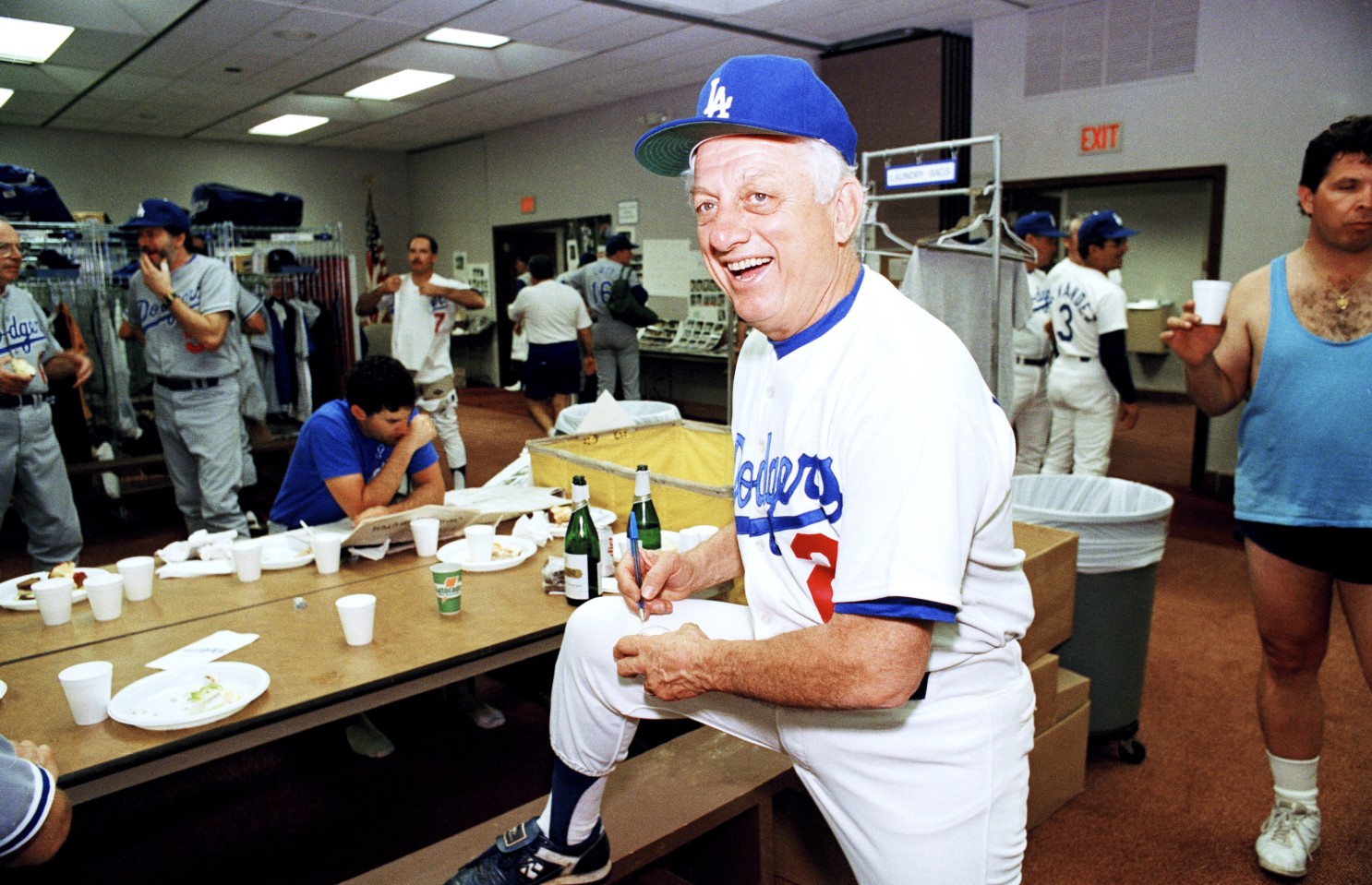 Tommy Lasorda has reported to the Great Dodger in the Sky and a lot of laughter and bluster has gone out of baseball.

The oldest living Baseball Hall of Famer, Lasorda died Thursday night in Southern California, the team announced Friday. He suffered a sudden cardiopulonary arrest at his home and was then taken to the hospital where he died. His death at 93 comes just days after being released from the hospital. He had previously suffered a mild heart attack in 2012 at which time he joked “the doctors confirmed, I do bleed Dodger blue.” The ebullient, bombastic and profane L.A. Dodgers’ manager piloted them to upset world championships over the Yankees in 1981 and Oakland A’s in 1988, before achieving post-career fame by managing the U.S. Olympic baseball team to an upset gold medal win over Cuba in 2000.

Lasorda, who compiled a 1,599-1,439 record as Dodgers manager from 1976 until his retirement on July 29, 1996 after suffering a mild heart attack, always said his proudest achievement was winning the gold medal as coach of the victorious U.S. Olympic team which upset heavily-favored Cuba in the 2000 Games at Sydney. “This is bigger than the World Series,” he proclaimed at the time. “I’ve managed four World Series and when the Dodgers won, the Dodger fans were happy, but the Cincinnati and San Francisco fans weren’t. But today, with this baseball team, the whole United States of America is happy.”

The son of Italian immigrants who grew up in Norristown, Pa., Lasorda credited his father, Sabatino, for teaching him the lessons of life — lessons which he used as the manager acclaimed as one of the greatest motivators of players in baseball history. In 1946, Lasorda, a left-handed pitcher, signed a $500 contract with the Philadelphia Phillies when he was 17 years old. “If (the Phillies scout) had only waited five more minutes, I’d have given HIM the $500 to sign,” Lasorda said.

Two years later, he was acquired by the Dodgers in the minor league draft and spent 14 years in the minors with only three brief stints in the majors, with the Dodgers in 1954 and ’55 and the Kansas City Athletics in 1956 in which he compiled an 0-4 record and 6.52 ERA. A fierce competitor, Lasorda was involved in a number of fights during his minor league playing days — a fact which gave the Dodgers pause when they offered him the job of manager of their rookie league team in Ogden in 1966. “How can I get into a fight as a manager?” Lasorda protested. But in his first game as Ogden manager, he did just that, coming to blows with opposing manager Fred Koenig.

After managing seven years in the Dodger system, with five pennants and two second-place finishes, Lasorda was named to succeed Walter Alston as their manager in 1996. By then, the Dodgers’ up-and-coming young core — first baseman Steve Garvey, catchers Joe Ferguson and Steve Yeager, outfielder Bill Buckner, second baseman Davey Lopes and shortstop Bill Russell — had all played for Lasorda in the minors and he was quick to accentuate the bond he’d already formed with them. “I want to be like a father to the players, to know their families, everything about them,” he said. “Managing is like holding a dove in your hand. Squeeze too tight and you kill it; not hard enough and it flies away.”

Under Lasorda’s nurturing “father-like” leadership, the Dodgers won the National League pennant in his first two years as manager, in 1977 and ’78, losing to the Yankees in the World Series both times. Three years later, however, he extracted his revenge against the Yankees when the Dodgers, after losing the first two games of the ’81 World Series, reeled off four straight wins to complete an upset world championship. An even more stunning upset was the Dodgers’ triumph over Tony La Russa’s 104-win Oakland A’s in the 1988 World Series. After previously upsetting the 100-win Mets (against whom they’d been 1-10 during the regular season) in the National League Championship Series, the Dodgers, given their impetus on gimpy-kneed Kirk Gibson’s Game 1-winning home run off Oakland’s vaunted closer Dennis Eckersley, swept the A’s for a second unlikely world championship for Lasorda.

It was around that time, the notoriously paunchy Lasorda was goaded by a $30,000 bet from two of his players, Gibson and Orel Hershiser, into getting involved in a weight loss program which resulted in him becoming a spokesman for Slim-Fast. After he lost 30 pounds, he quipped: “When I won my first World Series I was so elated I spent the whole winter eating. Of course, if I had lost the World Series, I would have been so depressed I’d have spent the whole winter eating.” (He later gained it all back.)

In all, Lasorda won eight pennants for the Dodgers, his last two coming in 1994-95. His most bitter disappointment as manager was in 1985 when he lost the NLCS to the St. Louis Cardinals in six games on a walk-off home run by Jack Clark. The Dodgers were one out away from forcing a Game 7, leading 5-4, when Clark, the Cardinals’ best hitter, came to the plate with runners at second and third. Rather than walking Clark intentionally, Lasorda ordered his reliever, Tom Niedenfuer, to pitch to him — the result being a gargantuan 450-foot homer that sent the Dodgers home for the winter.

“Second-guess me all you want,” Lasorda said, “but if the guy makes out, I look good. And if he hits a home run, then even my wife, Jo, knows I should have walked him. When Clark hit that ball, it tore my heart out.”

When Lasorda stepped down as Dodger manager after nearly 20 years in 1996, he turned the reins over to his longtime shortstop, Bill Russell, and moved upstairs to the front office, later replacing his longtime rival, Fred Claire, as general manager. Although his judgment of talent had never been questioned to that point — in 1988 he implored the Dodgers to take his godson from Norristown, Mike Piazza, a catcher at Miami Dade Community College, on the 62nd round of the draft — his term as GM was brief and unremarkable. He also became embroiled in a bitter, lifelong feud with his protégé, Russell, who, after being fired as Dodger manager in 1998, accused Lasorda of undermining him.

Off the field, Lasorda’s life, though highly profitable as a popular and prolific motivational public speaker, was also tinged with tragedy. His only son, Tommy Jr., died from AIDS in September 1997. Lasorda was never able to reconcile himself to the fact that his son was gay and insisted he had died of cancer.

At his 1997 Hall of Fame induction speech in Cooperstown, Lasorda thanked longtime Dodger owners Walter and Peter O’Malley, along with his mentor, former Dodger GM and scouting director Al Campanis. Then, in typical fashion, he told a self-effacing story of a conversation he once had with Dodger Hall of Fame shortstop Pee Wee Reese.

“I asked Pee Wee: ‘In 1955 if someone had walked into that Dodger clubhouse in Ebbets Field and said to you: One of these 25 guys will one day be managing the Dodgers to a World Championship and he asked you to put them in order, do you know where would’ve put me? 25th?’ He said: ‘No, you’re wrong. I’d have put you 24th. I’d have had (Sandy) Amoros 25th because he didn’t speak English.’”

Lasorda is survived by his wife, Jo, whom he married in 1950, and a daughter, Laura.