There’s Room To Cut From NYPD’s Budget, But City Must Be Mindful Of Spike In Crime 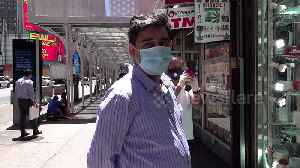 Mayor Bill de Blasio has heard the calls for police reform and he’s making changes, altering his budget to take money from the NYPD and send it elsewhere.

For nearly two weeks protesters have been demanding police reform. The pressure has turned into a plan from de Blasio — one short of details — to cut the NYPD‘s budget.

“It seems like we are at war with the NYPD and that’s not the case. We’re at war with a system that has been oppressing people for years,” protester Curtis Clark told Aundrea Cline-Thomas on Monday.

The mayor is proposing shifting funding from the NYPD to youth and social services, moving the enforcement of street vending out of the NYPD, and hiring community ambassadors to be a liaison between the police and New Yorkers.

“A lot of things end up at the doorstep of the Police Department that they shouldn’t be engaged in, mental health specifically, right,” City Council Public Safety Chairman Donovan Richards said. “Shouldn’t that money go into programming on the ground in a lot of communities that are underserved in these specific areas.”

“It’s nearly a billion dollars in overtime that the NYPD has spent,” Richards said.

In Crown Heights, residents say having access to resources would create a safer environment, especially after COVID-19 has devastated so many communities.

“If we were to change that we would have more social workers, more teachers, more people who are here to solve the problems, not incarcerate people,” protester Nerdeen Kiswani said.

“You have officers who being put in a position to go deal with protesters, but we just had somebody shot. So it’s quite concerning,” Herbert said.

The goal is to do both — get to the root of the problem and address crime as it happens.