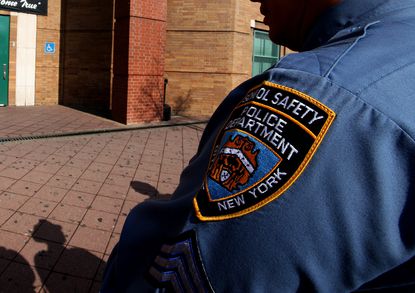 The city’s public schools should phase out school police, and pay student and parent leaders to make schools more welcoming for kids who’ve been traumatized during the pandemic, a task force convened by Public Advocate Jumaane Williams says.

Task force members — a mix of students, parents, advocates and elected officials — say the recommendations give schools a roadmap to become less punitive and more “healing-centered.”

The city has increasingly embraced an approach that recognizes students’ trauma, expanding the number of mental health professionals and training teachers how to recognize signs of distress.

But task force members say the efforts don’t go far enough, and minimize the role schools themselves can play.

“We think that their efforts so far have been really minimal and one-off and have not gotten at the true nature of a healing-centered school, which is that it’s led by students, families and staff,” said Katrina Feldkamp, a Bronx Legal Services lawyer and task force member.

The new recommendations ask every city school to put together students, parents and educators to review harmful school policies. Students and parents who participate should each get $250 stipends, at a cost of roughly $3 million citywide, the task force recommended.

“Parents and student organizers do a lot of unpaid and extremely emotionally exhausting unpaid labor,” said Tajh Sutton, a Brooklyn public school parent and advocate who participated in the task force. “The DOE should recognize and reward that.”

The task force also backed calls to remove police from city schools. Officials have committed to transferring more than 5,000 NYPD school safety officers to Education Department supervision. But the task force said the division should be eliminated.

“We will never be able to have schools centered on healing unless we take out that main source of trauma,” said Stephanie Pacheco, a 17-year-old Bronx student who graduated last year from the Manhattan Center for Science and Mathematics.

Task force members said the DOE needs to “rebuild trust” with families still skeptical of sending their kids back to in-person school by “acknowledging the harm that staff and families experienced last year [and] take responsibility for the DOE’s role in perpetuating that harm.”

DOE spokesman Nathaniel Styer said the agency is “already implementing many of their recommendations” and “fully agree[s] that our children should return to healing-centered schools this fall.”