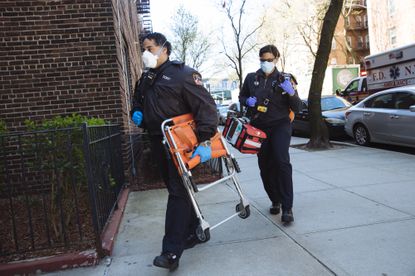 A new program aimed to keep cops from responding to 911 mental health calls is off to a good start and expected to expand, city officials said Wednesday.

People accepted help from the B-HEARD teams in 95% of cases — a higher success rate than when cops and EMS respond to similar emergencies, according to Susan Herman, Director of the Mayor’s Office of Community Mental Health.

When police respond to a mental health emergency, help is accepted 82% of the time, Herman said.

“When we look at how this entire system has been operating for decades, we’re beginning to see a pivot in how people suffering from a mental health emergencies are being treated,” Herman explained. “We have only had positive, supportive interactions so far, and people are getting mental health care sooner than in a traditional response.”

The NYPD still responded to 75% of the 532 mental health emergencies in the pilot area after it was deemed that the person who needed help had a weapon or was prone to violence, city mental health officials said. Cops were also put on standby in case the B-HEARD teams if they needed backup, but were only called in seven times.

In turn, police referred 14 of the mental health emergencies they were sent to B-HEARD teams once they determined that the person in need wasn’t a threat, officials from the Mayor’s Office of Community Mental Health said.

The city anticipates B-HEARD teams will respond to 50% of all mental health emergencies in Harlem in the coming weeks as they look over the data they’ve received and train 911 operators to better triage emergency calls. Teams will also be expanding to additional communities by the late fall.

“It’s been a promising first month,” Herman said. “We want this to work for everyone, from the people who need care to the first responders as well. That’s why we’re ramping up very carefully and deliberately.”

When B-HEARD teams are dispatched, mental health patients are treated on the spot and can be connected or reconnected to local mental health clinics for further care. They can also be taken to a residential counseling and care center or be hospitalized, if necessary.

The mental health counseling begins almost immediately with further help assured within 24 hours. In the past, most patients were hospitalized first and waited days to receive the help they needed, city officials said.

Mayor de Blasio announced the creation of the B-HEARD program in November, calling the plan a “major innovation” in how the city handles mental health and policing.

Twenty FDNY EMTs and paramedics volunteered for the detail. They received five weeks of training about how to deal with the mentally ill, how to diffuse potentially violent situations and some self-defense moves.

Last month, NYPD Police Commissioner Dermot Shea said NYPD officers will be given additional training to help officers deescalate situations with the mentally ill who are unarmed or carrying a weapon other than a firearm.

“We’ve had millions of encounters with the mentally ill and have had the lowest use of force, but we always trying to get better,” he said. “This is another tool to provide to the officer and give to them.”