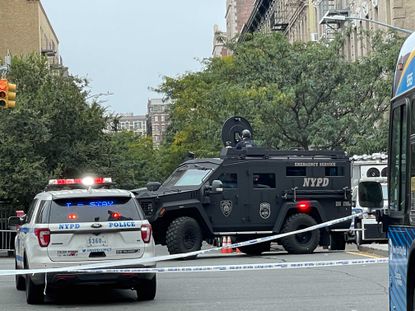 When cops showed up at a Harlem apartment to arrest a suspect for a recent domestic incident he shot at them before barricading himself, sparking a three-hour standoff that ended with him taking his own life, police said.

Panicked friends of 23-year-old Antonio Armstrong were texting him in disbelief after he locked himself inside his fifth-floor home on W. 147th St. near Adam Clayton Powell Jr. Blvd. after firing at cops, sending them scrambling out of the apartment.

“I hope that ain’t you,” longtime friend and neighbor Sylvia Williams texted Armstrong as heavily armed cops encircled the block. She never received a response.

Cops from the NYPD’s Manhattan North Warrants Squad were about to take Armstrong into custody for a past domestic incident about 8:30 a.m. when he “produced a gun and started firing at our officers,” NYPD Chief of Department Rodney Harrison said at a press conference at the scene.

The officers were between seven and 15 feet from Armstrong when he started firing, Harrison said.

“Fortunately, none of the officers were struck,” Harrison said. “One of our officers returned fire as the team did a tactical retreat down the hallway.”

On June 7, Armstrong was the subject of an amber alert when he allegedly abducted his 9-month-old daughter. Later that day, a woman dropped the girl off safely at FDNY Engine 91′s headquarters on E. 111th St.

Watch as @NYPDChiefOfDept provides an update on a police investigation in Manhattan. pic.twitter.com/OtVY3GSLIY

On Wednesday, after Armstrong fired at cops, officers from the NYPD’s Emergency Services Unit and Hostage Negotiation team flooded the scene. After a short time, Armstrong stopped responding to their attempts to communicate, officials said.

Cops found Armstrong on the floor of his apartment dead from a “self-inflicted gunshot wound to the head,” Harrison said.

An unharmed woman was found in the apartment with Armstrong, although her role in the standoff was not immediately clear. “We don’t know if she was in danger or not,” Harrison said.

A blood-stained gun was also recovered from the apartment.

The woman in the apartment wept as she left the building after the stand-off’s end.

Besides the domestic assault complaint, Armstrong was a suspect in a Harlem homicide that occurred last month when he allegedly opened fire into a crowd of people, police sources said.

The NYPD’s account of what happened left neighbor Williams in disbelief. Hours after the standoff, she remained on the block waiting for city Medical Examiner workers to remove Armstrong’s body from the building. Armstrong was a frequent visitor to her apartment.

“Now I’m gonna be opening the door waiting for him to be coming in and he won’t be coming in no more,” she said through tears. “You know when something don’t feel real?”

“The whole time we’re waiting for him to come out,” she said of the stand-off.

Williams said Armstrong had suffered from a bipolar disorder and was often paranoid but doesn’t believe he would ever take his life.

Armstrong was a father and aspiring rapper who performed under the name as Balla Alert and was dedicated to his music, she said.