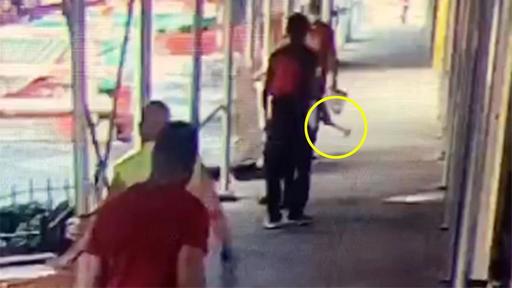 Cops have arrested a suspect in two unprovoked Chelsea attacks in which a supermarket manager was bashed with a hammer and a deli worker was clobbered with a wine bottle, police said Monday.

Oscar Apronti, 27, was nabbed Sunday and charged with two counts each of assault and weapon possession and one count of stalking.

He is accused of recording himself using a bottle to attack a worker opening a deli on Eighth Ave. near W. 25th St. about 6 a.m. April 2, leaving the victim with a concussion. He also made a recording when he returned three days later to vandalize the store, a co-worker said.

He struck again about 7 a.m. July 23, allegedly attacking Ramon Acevedo, 64, with a hammer as the victim was opening the Ninth Ave. Gristede’s he manages.

Acevedo, who needed 12 stitches to close his wound, was back at work Monday for the first time since the attack.

“Well, that’s a good thing,” he said after learning of the arrest. “Because a person like that shouldn’t be out on the streets. I was lucky — but someone else might not be.”

It should not have taken so long to arrest Apronti, against whom he had previously filed complaints for acting out and for shoplifting, Acevedo said. A cashier also filed a harassment complaint against him.

“I hope whatever happens after this gets him out of the streets because he shouldn’t be out there,” Acevedo said. “That’s gonna be the next issue, what’s gonna happen after this. Because he definitely needs to serve time. He’s not a nice guy to be out.”

“I’m glad it was me and not somebody weaker, caught off guard.” he added. “Because then it would have been a tragedy.”

“It’s a little pain here and there but I’m not incapacitated, that’s for sure,” he said. “I’m not sure what may develop from it but I’m glad I’m back at work.”

Apronti, who lives in Chelsea, was awaiting arraignment in Manhattan Criminal Court Monday.

He was arrested May 27 for a separate harassment and stalking case. He is due back in Manhattan Criminal Court Aug. 26 on those charges.