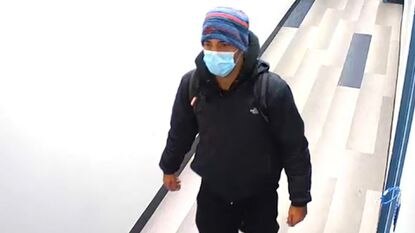 Cops on Wednesday arrested a suspect in the shocking caught-on-video attempted rape of a 14-year-old girl in a Brooklyn doctor’s office.

David Gonzalez, 31, of Sunset Park — who cops say fled the attack on a moped — was charged with attempted rape, forcible touching and acting in a manner injurious to a child.

Cops conducting an extensive video canvass tracked his movements for nearly five miles, from the Midwood doctor’s office to a home in Crown Heights, where he was arrested about 2:05 a.m.

Gonzalez’s victim had arrived early to the Foster Ave. office for her mom’s appointment when he allegedly approached just before 1 p.m. on Sunday and exposed himself to her, police said.

The victim tried to run but Gonzalez grabbed her, covered her mouth and knocked her to the ground, authorities charge.

Surveillance video shows Gonzalez, wearing a knit hat and surgical mask, dragging the teen into the brightly-lit hallway on Foster Ave. near E. 3rd St. and pinning her down.

Police said the victim kept fighting him off until he eventually ran out of the building and escaped on a moped towards McDonald Ave.

The teen was not physically injured and her mom arrived a few minutes after the attack, sources said.

Gonzalez has an extensive criminal history with 19 arrests dating back to 2008. The arrests run the gamut from public lewdness to assault and robbery but there are no previous sex assaults on his record, cops said.