Street renamed for boy killed while eating dinner in car 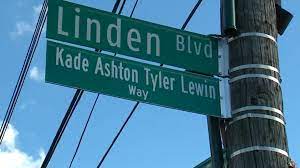 There were tears and tributes on Thursday to honor a 12-year-old boy who was killed sitting in the back of a car eating dinner in Brooklyn.

The community came together to honor him by naming a street after him.

Suzette Lewin was shedding tears from the devastating loss as she stood on East 56th Street and Linden Boulevard in East Flatbush, where her 12-year-old son, Kade was killed. She held a sign bearing his name.

“I want justice for Kade and end this gun violence for everyone,” she said.

On March 31, Kade and his 8-year-old niece were sitting in the back of his cousin’s car. His 20-year-old cousin was also shot. Detectives believe this was a case of mistaken identity.

The car is a common make and model with tinted windows, so the suspects may not have been able to see there were children inside.

“To get a street memorialized for someone, they have to be considered a hero. And that was pretty easy to do. He’s a loyal, dedicated friend who protected everyone around him,” said Principal Angela DeFilippis.

Months later, police have made no arrests and shared no new leads with the public.

“It has been 63 days since Kade Lewin has been taken from his family, yet they’ve had no results as of yet. As this summer gets hotter, I am begging the 67 and all police entities to make sure this case does not get any colder,” said City Councilmember Darlene Mealy.