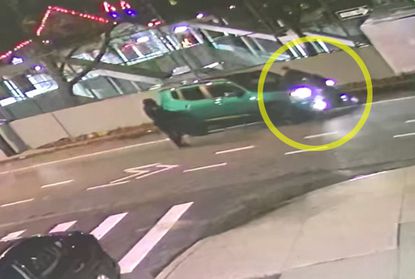 The Legal Aid Society slammed the office of District Attorney Michael McMahon for not requesting bail for Presti, who faces charges of felony assault on an officer and felony reckless endangerment.

“While Mr. Presti, a white man who stands accused of assaulting a police officer with his motor vehicle, is at home with his family, able to continue operating his business and has unfettered access to his defense lawyers, thousands of equally presumed innocent Staten Islanders are sent to Rikers per year on far less serious charges,” said Legal Aid’s Marie Ndiaye. “Those less fortunate than Mr. Presti are the overwhelmingly Black and brown clients of Legal Aid Society.”

The public defender group, which said it’s not calling for Presti to be jailed, called the case “another example of a disparate legal system that benefits white New Yorkers with means over Black and brown New Yorkers.”

The sheriffs were looking to arrest Presti after noticing his was still open and serving customers, even after the city and state ordered it shut down for defying COVID regulations.

McMahon sidestepped a question Tuesday about why his office sought no bail.

“My office takes any violence against law enforcement officers very seriously and we are carefully reviewing all facts and evidence related to this matter to ensure justice is served,” he said. “As this case remains under investigation, there is no further comment at this time.”

Fonte maintains the sheriffs didn’t identify themselves, and Presti was fleeing for his life. He also said Matos’ injuries were “unconfirmed.”

Mac’s Pub became a political flashpoint after Presti declared it an “autonomous zone” Nov. 20 in defiance of coronavirus regulations — despite its location in an “orange” zone where restaurants are only allowed to serve outdoors or takeout because of rising COVID rates.

The bar was shut down last week and its liquor license revoked, but it stayed open to serve customers food and drink over the weekend, the city sheriff’s office alleged.