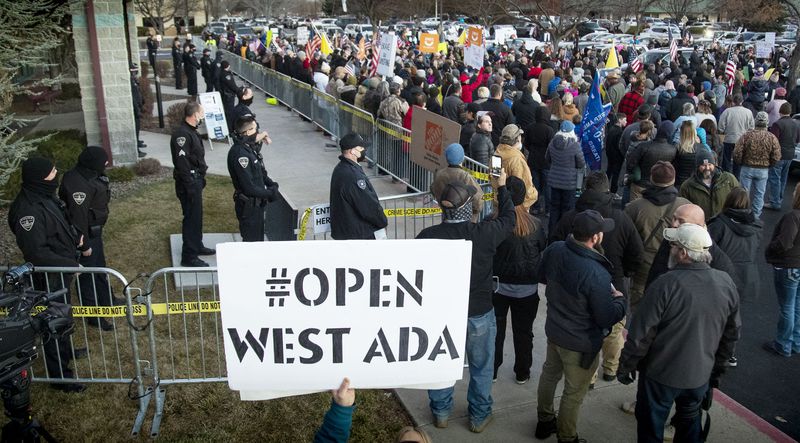 Idaho public health commissioners had to shut down their meeting and scramble home because of coordinated pro-coronavirus protests across the Boise area.

The commissioners tried to meet Tuesday to address the COVID-19 pandemic, but were met with fierce resistance from anti-mask protesters, the Idaho Statesman reported.

The anti-maskers gathered outside the public health building in downtown Boise and at commissioners’ houses around the city, according to a press release from Boise police.

The cops planned for a protest at the health building, but still believed “officers would not be able to maintain public order,” the press release said. Along with Boise Mayor Lauren McLean, they asked the commissioners to postpone the meeting.

One health official, Diana Lachiondo, interrupted the meeting in tears because protesters outside her home were threatening her family, the Associated Press reported.

“My 12-year-old son is home alone right now and there are protesters banging outside the door,” she said.

Another official, Dr. Ted Epperly, said people had gathered outside his house as well. He told the Statesman he was disappointed the meeting had to be called off.

One person was arrested trespassing at the public health building, according to Boise police. Cops said they’re trying to get arrest warrants for some people who demonstrated outside the officials’ homes.

The commissioners represent Ada, Boise, Elmore and Valley counties. Ada is the most populous county in the state, with one-fourth Idaho’s population.

The officials were supposed to debate new COVID restrictions, which would not be close to the strictest in the country but were apparently more than enough to anger Idahoans. They would’ve required masks only in certain situations and allowed restaurants and bars to remain open.

Coronavirus across America: Photos from every state show the depth of the crisis

Idaho doctors have warned state leaders that they’re so overwhelmed by COVID cases that they could soon be forced to let some people die because they simply don’t have the resources to care for all patients.