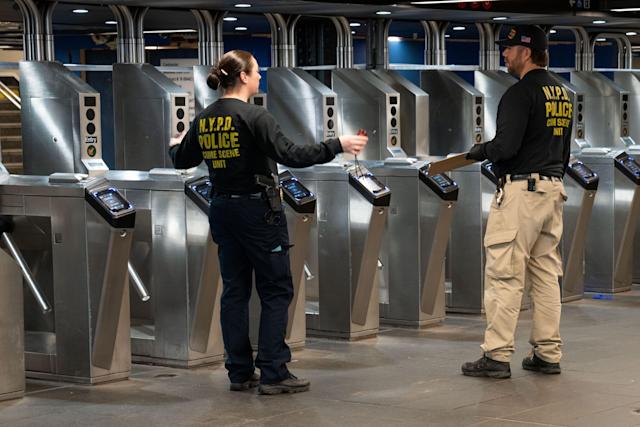 A street soccer phenom was randomly stabbed in the neck as he slept on a subway train pulling into Manhattan’s Penn Station early Sunday, cops said.

Hours after the senseless slaying, cops released surveillance photos of the suspect as they pressed their manhunt for the killer.

Akeem Loney, 32, was knifed as an uptown No. 2 train entered the transit hub about 12:15 a.m., cops said. EMS rushed him to Bellevue Hospital, where he died about an hour later.

The attacker ran out of the station and cops are asking the public’s help identifying him and tracking him down.

Fox, 28, works for Street Soccer USA, where everyone referred to Loney by his nickname “Lonny.” The organization uses soccer as a way to reach vulnerable communities and give them access to social services to lift them out of homelessness.

“He wanted to be around the game,” Fox said of Loney. “He wanted to play, he wanted to coach. He was really nice. I spent a lot of time with him.”

Fox and his mother even helped Loney move into an apartment near Crotona Park in the Bronx about three years ago.

“Me and my mom got a truck and helped him move into his place,” Fox said, recalling how Loney once helped him out when he needed to move. “He was a great guy. It’s hard to believe.”

Fox thought Loney might have recently reentered the city’s shelter system after he and the cousin he was living with had a falling out and was spending nights on friends’ couches — and riding the subway system. Fox recently moved to California and hadn’t seen Loney for about a year.

“He was between jobs. He wasn’t documented, which was part of the problem for him and something that we always struggled with, with him,” Fox recalled. “He bounced around, but he had a large community of friends. Most of them were through soccer, and a lot of them were Jamaican guys and Caribbean guys.”

Loney used to work at restaurants and aspired to play soccer professionally.

Another ridiculous goal from the @StreetSoccerUSA NYC squad 👀

One video shared on Twitter in February 2020 shows Loney, dressed in a white jersey with the number 20, nimbly dance around the ball to set up a teammate’s goal.

“He actually wanted to grow our program there (in New York) and start working with all of his guys in the Bronx,” Fox said.

Fox was stunned by the circumstances of Loney’s sudden senseless death.

“He wasn’t aggressive at all, but he could get fired up, I would say, if somebody wronged him. I would have a very hard time believing that he was the one who started anything,” he said. “We have players pass away from time to time, but this is tough.”

The suspect in Loney’s killing is described as about 5-feet-9 and 185 pounds with a dark complexion and medium build. He was wearing a white baseball hat, black face mask, gray jacket, white shirt with an orange-and-black checkered hood, black pants and black shoes.