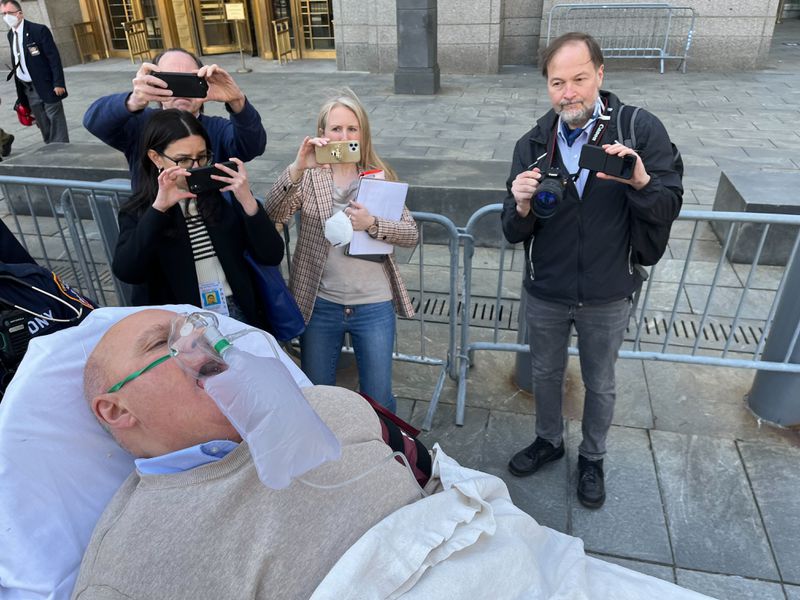 The trial of accused Sarah Lawrence College sex cult leader Lawrence Ray descended into chaos Tuesday as the alleged abuser was wheeled out of the courthouse on a stretcher — and the Justice Department mistakenly released a list of well-heeled johns who paid to have sex with one of the leader’s followers.

Ray, 62, was put in an ambulance outside Manhattan Federal Court for the second time during his trial. His eyes were rolled back in his head and mouth was agape. Just last week, Ray was hospitalized after his lawyers said he suffered a seizure.

While Ray was rushed to the hospital, the feds faced a different type of emergency. A trial exhibit discussed in court, but not shown publicly, was accidentally uploaded to a database for reporters. The exhibit was a list, compiled in 2018 by Ray’s follower Claudia Drury, of men she slept with in exchange for money.

Drury, 31, has testified she earned $2.5 million working as a prostitute for four years while in Ray’s small cult of Sarah Lawrence students and other young adults. She said that Ray forced her to work as a prostitute to repay bogus debts he convinced her she owed.

Reporters have a copy of the list, but is not publishing the names of the 112 alleged johns. The list appears to include a retired New York judge and a hedge fund manager, a celebrity dating coach — and an executive at Gap and her husband — among many others.

“This file was inadvertently loaded to the U.S. v. Ray file share. Please do not reproduce, share, or use this exhibit in any way,” the Southern District of New York wrote in an email to reporters Tuesday morning.

Ray is on trial for 17 racketeering counts alleging he physically and sexually abused the group of wayward youngsters between 2010 and 2020. Ray tortured acolytes in what he called “The Ray Family,” according to testimony, allegedly hitting one follower in the legs with a hammer, while tightening a tinfoil noose around another victim’s genitals. Much of Ray’s abuse came under the guise of therapy, witnesses have testified.

Drury was in the midst of her testimony when Judge Lewis Liman called for an abrupt break and closed the courtroom about 12:30 p.m.

She had been testifying about turning over the “extreme majority” of her prostitution proceeds to Ray.

Drury was one of the students who met Ray in 2010 through his daughter, Talia Ray, when they were students at Sarah Lawrence.

By 2015, Drury was working as a prostitute out of her mother’s apartment, as well as at hotels, to pay off debt she believed she owed Ray for destroying his property.

She also believed she had poisoned Ray and his daughter. Poisoning was a recurring obsession for Ray, witnesses have said.

“I wanted to repair what I believed I had done to Larry,” Drury said when asked by prosecutors why she began working as a prostitute. “But the extent to which I became a prostitute and the amount of people I saw … it was because I felt immense pressure from Larry to get money for him.”

“He got extremely mad. How could I think I was going to keep money after I poisoned him and poisoned his family? And he took all $700,” she recalled.