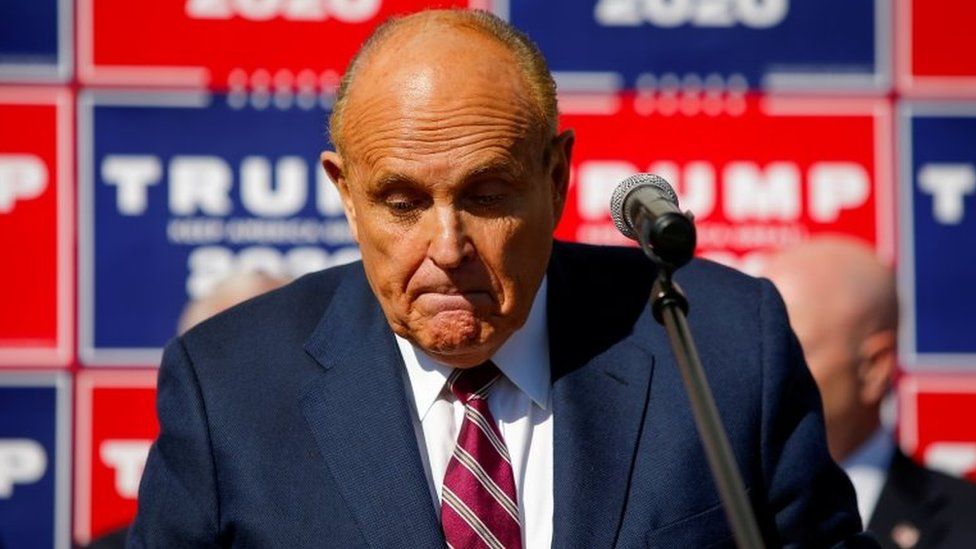 Rudy Giuliani may never see the inside of a courtroom again — at least not as an attorney.

A panel of Manhattan judges suspended Giuliani’s license to practice law in New York on Thursday, ruling that he has betrayed his professional oath by peddling “false and misleading” claims about the 2020 election on behalf of his most high-profile client, former President Donald Trump.

The temporary suspension — which could become permanent within weeks — was warranted because Giuliani poses an “immediate threat” to the public in that he continues to push the thoroughly debunked falsehood that Democrats stole the election from Trump, five judges from the State Supreme Court’s appellate division wrote in a decision.

Calling his misconduct “incredibly serious,” the judges said Giuliani has tarnished “the reputation of the entire legal profession” by telling his election lies before courts, lawmakers and the public. They also said that his actions “directly inflamed the tensions” that resulted in the deadly Jan. 6 attack on the U.S. Capitol.

“The seriousness of respondent’s uncontroverted misconduct cannot be overstated,” the judges wrote. “This country is being torn apart by continued attacks on the legitimacy of the 2020 election and of our current president, Joseph R. Biden.”

The former mayor-turned-Trump attorney — who’s also facing a criminal investigation that resulted in his law office and apartment being raided by the FBI in April — can fight his suspension by requesting a hearing within 20 days.

Giuliani, 77, did not return a request for comment, but his most prominent client came to his defense.

“The greatest Mayor in the history of New York City, the Eliot Ness of his generation, one of the greatest crime fighters our Country has ever known, and this is what the Radical Left does to him,” Trump, who’s himself under criminal investigation by the Manhattan district attorney, said in a statement. “All of New York is out of control.”

Giuliani, who has held a New York law license since 1969, was the most vocal mouthpiece for Trump’s erratic attempts to overturn President Biden’s election.

For weeks after the election was called, the ex-mayor appeared in courtrooms and statehouses across the country demanding that millions of Biden votes be invalidated, citing baseless conspiracy theories about Democrats rigging the election against Trump.

In their decision, the panel of Manhattan judges made several references to the Jan. 6 attack as a tragic consequence of the lies embraced by Giuliani.

“One only has to look at the ongoing present public discord over the 2020 election, which erupted into violence, insurrection and death on January 6, 2021 at the U.S. Capitol, to understand the extent of the damage that can be done when the public is misled,” they wrote.