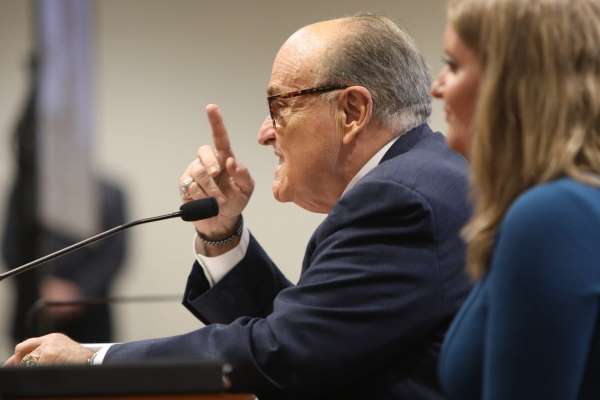 So much for sticking with Donald Trump through thick and thin.

Trump is no longer relying on Rudy Giuliani for legal representation, an aide to the former president said Tuesday, as the former mayor’s own troubles with the law continued to pile up.

“Mayor Giuliani is not currently representing President Trump in any legal matters,” said Jason Miller, a longtime Trump adviser who serves as his chief spokesman now that he’s out of office.

Miller declined to say if Trump has permanently cut ties with Giuliani. “Wouldn’t qualify further,” he said in a text message.

Giuliani did not return a request for comment, and neither did his spokeswoman.

Giuliani has served as Trump’s personal attorney for years.

He also spearheaded Trump’s evidence-free attempt to get courts to throw out millions of votes cast for President Biden in battleground states in the Nov. 3 election.

After news spread that Trump’s no longer retaining Giuliani as a lawyer, Miller took to Twitter to offer some support for the embattled ex-New York mayor.

“The Mayor remains an ally and a friend,” Miller tweeted.

Word of Giuliani’s sidelining came hours after Rep. Bennie Thompson (D-Miss.) and the NAACP filed a lawsuit alleging that the former mayor, Trump and a handful of far-right extremist groups conspired to block Congress from certifying the 2020 election results on Jan. 6 in violation of the Ku Klux Klan Act of 1871.

Trump and Giuliani both spoke at an incendiary rally directly before the Jan. 6 attack on the U.S. Capitol, and the suit from Thompson charges that they should thereby be held accountable for inciting the riot, which left a police officer and four others dead.

Giuliani is separately facing calls from across the political spectrum to have his license to practice law revoked.

More than 3,100 big-shot lawyers, including former Republican Attorney General Stuart Gerson, urged the New York Bar Grievance Committee earlier this month to rescind Giuliani’s license, citing his various attempts to undermine and overturn the results of 2020 election with false claims of voter fraud. “Giuliani either won’t or can’t stop spreading the big lie of the stolen election, and every time he lies, it divides society,” the lawyers said on Feb. 1.