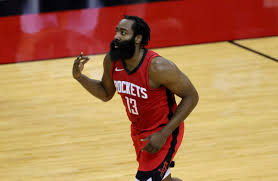 The deed is done.

The Nets have formed a superteam, reportedly finalizing a trade for Rockets superstar James Harden on Wednesday. The franchise will part with a large chunk of its future draft assets as well as two of its brightest young stars to facilitate a trade for the former league MVP.

Nets GM Sean Marks said at the start of the season he would not “mortgage the future” in a deal for any star. That is no longer the case.

WHAT DID THE NETS GIVE UP

The Nets are giving up Caris LeVert, who was re-routed to the Indiana Pacers in a deal that sends All-Star Victor Oladipo to the Rockets. They are also parting ways with Allen, who is headed to Cleveland with Taurean Prince in exchange for guard Dante Exum and the Bucks’ 2022 first-round pick (to Houston).

LeVert is coming off of a five-game stretch of scoring 20 or more points. Allen recently supplanted DeAndre Jordan as Brooklyn’s starting center. Former second-round pick Rodions Kurucs will also be heading to Houston as part of the deal, and Prince is a scoring forward who has started with Kyrie Irving (personal reasons) and Spencer Dinwiddie (ACL) out of the rotation.

The trade news comes on the same day that the Rockets announced they were keeping the unhappy Harden away from the franchise amid reports that trade talks were heating up.

“We felt that it was best for the group and best for James not to come to practice,” Rockets coach Stephen Silas told reporters.

The Rockets keeping Harden away from the team comes a day after the eight-time All-Star said the situation in Houston couldn’t be fixed.

“We’re just not good enough,” Harden said after Tuesday’s blowout loss to the Lakers. “I love this city. I literally have done everything I can. I mean, this situation is crazy. It’s something that I don’t think can be fixed.”

The Nets roster as constructed prior to the trade leaves much to be desired, and Marks said at the beginning of the season that he was open to both small and whole-scale changes in the trade market. Acquiring Harden, the 2018 league MVP who has averaged about 35 points per game over each of the past two seasons, gives the Nets three bona fide offensive superstars to build around, and for an organization that has been vocal about its championship aspirations, the Nets have taken the driver’s seat as it pertains to talent on a roster.

The Nets now have three roster spots to fill. They did not give up Dinwiddie, or sharpshooter Joe Harris in the deal, and their roster is still one of the deepest in the league, featuring Landry Shamet, Bruce Brown, Jordan, Jeff Green and Timothe Luwawu-Cabarrot. Irving is also expected to return from his personal leave, though there is no timeline for when he will come back.

The Nets pulled off a similar trade under different leadership when they first moved to Brooklyn, dealing six years’ worth of picks and pick swaps to the Celtics for a well-past-their-prime Paul Pierce, Kevin Garnett and Jason Terry. That Nets team made a second-round playoff appearance before Garnett, Pierce and Terry each left the Nets.

Durant, Irving and Harden each have gallons of gas left in the tank, and they immediately form the league’s most talented superstar trio.

The Nets, though, already had issues building chemistry on a team with so many moving parts — mainly Durant returning from an Achilles injury after a year off, and Irving returning after playing just 20 games last season.

Acquiring Harden gives the Nets insurance in case one of their other stars must miss games due to injury. It also gives Brooklyn its best odds at winning a championship, with Marks going all-in on star power to lead the Nets into their first Golden Era in Brooklyn.