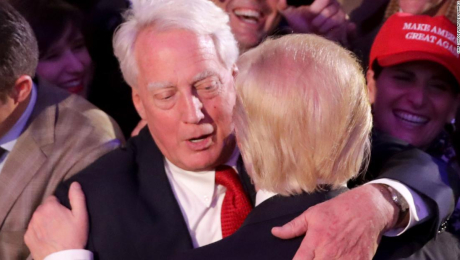 The president is expected to travel to New York to visit his sibling sources confirmed to both the Daily News and CNN.

Details of Robert Trump’s condition have not been disclosed, but officials told ABC News that the president’s brother is “very ill.”

White House press secretary Kayleigh McEnany told the network that Trump and his brother “have a very good relationship” and that the president would be providing more details later.

In June, Robert Trump was hospitalized in the intensive care unit at Mount Sinai Hospital in New York for more than a week.

But he had been well enough in recent weeks to lead a lawsuit on behalf of the Trump family which had been trying to stop publication of a tell-all book by the president’s niece, Mary, titled “Too Much and Never Enough”.

The Trump family claimed Mary Trump’s book was a violation of a nondisclosure agreement she signed in connection to a financial settlement she received from the family years before.

Robert Trump said at the time that he was “deeply disappointed” in his niece’s decision to air the family’s dirty laundry, and that he and the “entire family” were “so proud of my wonderful brother, the president.”

The president had been scheduled to go to his Bedminister, N.J. resort on Friday, but it is unclear if he will go there before or after his New York stop.

Either way, the NYPD would work with the Secret Service and help provide an escort to the hospital, and have cops stationed outside the hospital, a police source said.

The security detail at Trump Tower may also see additional cops, just in case Trump decides to go there.

Fred Trump Jr., the president’s older brother, died in 1981 at the age of 43 from complications with alcoholism.His brother’s early death has had a profound influence on the president’s life, and he has said he never drinks because of it.

Siblings Robert Trump and Elizabeth Trump Grau are both retired business executives. He was in real estate and she was in banking.

Robert Trump previously worked at the Trump Organization after following the future president into the family business.