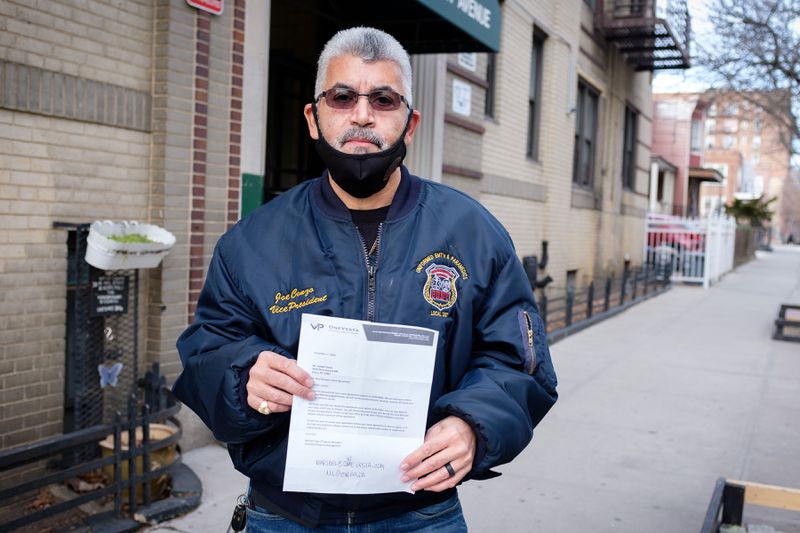 A retired FDNY medical tech who survived being buried under the ruins of Word Trade Center is fighting to save himself once again — this time from being booted out of the Bronx apartment he’s called home for 20 years.

Former EMT Joe Conzo learned about the very real prospect of being tossed out onto the street when he and his Bronx neighbors got a notice from their building’s new owner just a couple of days before Christmas telling them that, as of the end of January, they’d have 90 days to find a new place.

Conzo is among dozens of tenants in nine buildings across the Bronx and Inwood whose leases won’t be renewed under the ownership of Glacier Equities, which purchased the properties for $23 million in November.

Born and raised in the South Bronx, Conzo is a humble man — but he’s not just any tenant. His mother Lorraine Montenegro and his grandmother Evelina Antonetty both have streets named after them in the Bronx for community work that spanned seven decades.

On 9/11, then an FDNY EMT, Conzo rushed downtown to tend to the wounded amid the devastation of the attack on the Twin Towers. He arrived right after the second plane hit, was buried under the tower’s rubble, and had to claw his way out.

In the aftermath of the attack, he helped start a registry for first responders exposed to the poisonous air that pervaded the grim process of rescuing the trapped and locating the dead.

Conzo himself was eventually diagnosed with cancer of the liver and pancreas due to the air he breathed at Ground Zero. He’s now in remission, but is realistic about his chances of staying that way given the poor odds of surviving pancreatic cancer.

He also has no illusions about why he and his neighbors are now faced with having to leave their homes: Glacier’s managing member Myles Horn is a businessman and wants his tenants out so he can make a buck, Conzo believes.

“This is a landlord who didn’t take into account what fine tenants he has and is just out to make money,” said Conzo, who is also renowned for his photos documenting the early days of hip hop. “How dare you, just before Christmas, send this out?”

Under other circumstances, the retired EMT said he’d probably take a buyout and move from the building he’s lived in since 1985, but like his grandmother and his mother, he doesn’t like backing down from a fight and intends to resist, along with many of his neighbors.

Fellow tenant Donald Gordon said there’s not much else for the renters in the building to do at this point but resist. Much of the fight, he added, will be about shaming the building’s new owner publicly.

“Where am I going to go?” said Gordon, a UPS worker who’s lived at the 3245 Perry Ave. address in Norwood for nine years. “These people are not even trying to work with us. These guys have millions of dollars to pay for top-notch lawyers, which we don’t. If the public doesn’t know about it, these guys are going to steamroll us out. It’s unreal.”

Glacier’s manager Horn, when contacted by The News, disputed the idea that the company would not work with tenants. He conceded that the timing of the notice, which was sent by OneVesta Property Management, was “lousy,” but said that not one tenant reached out to him or OneVesta to inquire about buying the apartment units or filing a hardship claim to stay longer.

“Nobody called and nobody complained,” Horn told The News. “We are the wrong people to put in this position … If you have an issue, call us.”

But Conzo challenged the veracity of Horn’s statements. He said that he and other tenants reached out several times to OneVesta. After The News contacted Horn on Monday, Conzo finally received a response, and an apology, from him that same afternoon.

Glacier is now waiting on the state attorney general to approve paperwork that would allow it to sell the rented units in several of its newly purchased buildings on the open market. Once that happens, Horn said the units will sell “inexpensively,” from anywhere between $250,000 to $500,000 a pop.

“I’m a retired civil servant,” Conzo said. “Who has $200,000 to half a million dollars laying around, or access to that, or is willing to invest that when you can buy a house (outside the city) for that kind of money?”

The tenants of the buildings now owned by Horn and his company are not the only ones outraged by the landlord’s behavior.

Bronx Assemblyman Jeffrey Dinowitz described what Horn is doing as “unconscionable,” and said that while there is a current eviction moratorium in place that prevents tenants from being thrown out onto the street because of the threat of coronavirus, it will ultimately sunset.

“Absolutely, this is an abuse,” Dinowitz said. “They’re talking about throwing people out.”

Dinowitz is working with the West Bronx Housing and Neighborhood Resource Center to determine whether any of the rental units in the building were improperly removed from rent-stabilized status three decades ago when the building was converted to a co-op. If that proves to be the case, it could provide a pathway for some residents to remain.

“It’s disgusting and it’s despicable,” Diaz Jr. said of Horn’s decision not to renew tenants’ leases. “The governor can tell these folks that as long as no one has been in violation of the lease, these leases should be renewed.”