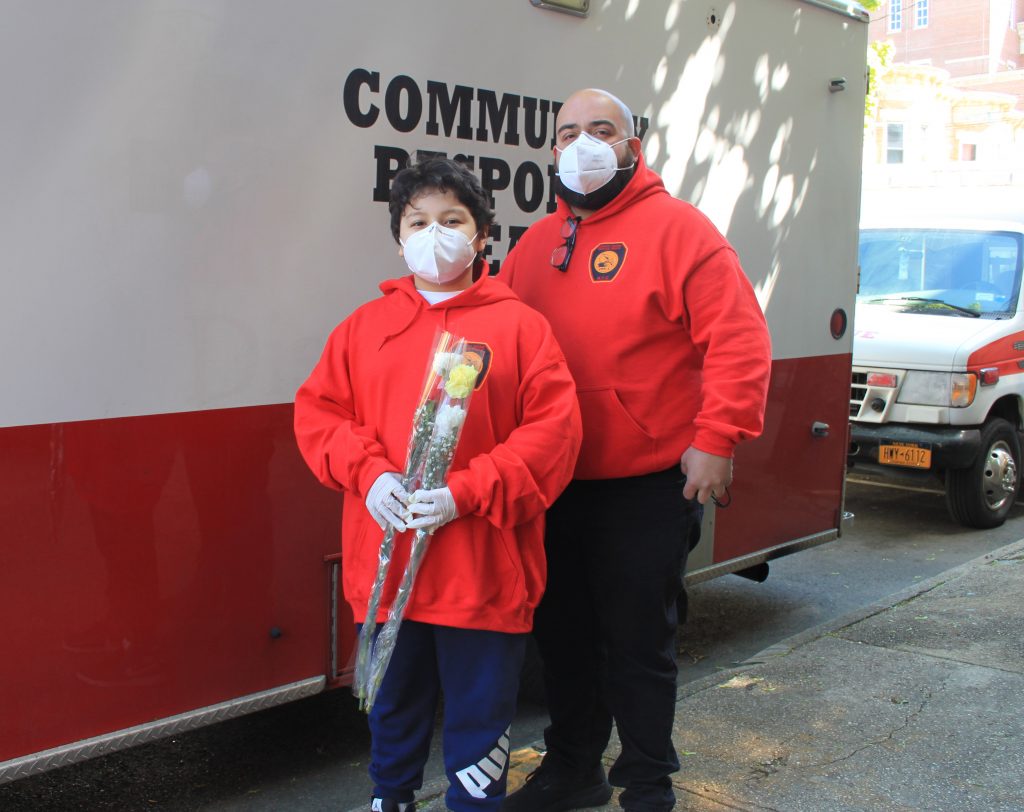 Jacob Altamirano, a fifth-grader at P.S. 290Q, partnered with Hungry Monk, a Ridgewood-based food pantry and homeless outreach truck, to help feed their neighbors on Saturday, May 9.

“I was inspired because we were kind of running out of food, so what about other people? There’s homeless people, poor people, and not enough money, so I thought of donating and teaming up with Hungry Monk,” Altamirano said.

The 10-year-old also handed out flowers to women picking up grocery bags in front of the Covenant Lutheran Church, located at 68-59 60th Ln., in celebration of Mother’s Day.

Hungry Monk’s director, Father Mike Lopez, said Saturday marked the 60th day since they began their COVID-19 emergency work. They have distributed more than 250,000 pounds of food and fed more than 10,000 families in Queens — but Lopez said they’ve seen the need triple since the health crisis reached its peak.

“We support Jacob Altamirano and his work in the community. We think it’s phenomenal that he’s trying to support, and we think other young people should be encouraged to do this sort of work,” Lopez said. “It takes a community to do this.”

Hungry Monk recently started a fundraising campaign, as the $60,000 they had in their budget for the whole year was gone in a month.

To offer some help, Altamirano and his mother, community leader and activist Connie Altamirano, gathered $850 worth of canned food thanks to donations from family and friends. Some local businesses also donated masks, toothpaste, mouthwash and flowers.

This is what the Borough of Families is all about! Helping stem the tide of food insecurity in his own community is 10-year-old Jacob Altamirano, who’s spending his Saturday distributing free food to his neighbors in #Ridgewood. Way to go, Jacob! #Queens is so proud of you. pic.twitter.com/eIvUSjKFNb

“We organized this in a week and a half, and Hungry Monk was kind enough to pick up all the food from our home,” Connie said. “As Jacob’s mother, I’m honored and proud that even in this traumatic state of the pandemic, and how it’s affecting him, he’s still rising to the occasion to help. That’s always in him, to give back.”

Connie emphasized the importance of helping Hungry Monk, as the food insecurity continues to grow amid the loss of jobs and resources due to the coronavirus.

“We’re blessed to partner up with Father Mike and his wonderful team, and hope that we can continue because there is a need,” Connie said. “The politicians and city officials who are supporting him should continue to do so, and whoever isn’t should start to, because the Hungry Monk is helping feed our people in Ridgewood and beyond.”

P.S. 290Q’s Principal José Luis Jiménez and parent coordinator Jo Ann Lawson showed their support of Jacob, whose nickname at school is “Heart and Soul,” at the event.

Lawson said she’s heard from a lot of parents in their school community, which includes residents of Ridgewood, Maspeth, Elmhurst and Corona, who are experiencing food insecurity.

“There are a lot of parents and families struggling at this time and in need of food. A lot of them aren’t working, so financially they’re struggling as well,” Lawson said.

But she added their educators are doing as much as they can.

“We have an amazing staff and principal, who has been quite extraordinary during this situation,” Lawson said. “Even though it happened so suddenly, our teachers were on top of everything, making sure students had what they needed to continue their education, they’re always in contact with families making sure everyone’s okay and doing wellness checks.”

Jacob was lauded by Senator Joseph Addabbo, who presented him with an award for his work in the community.

Addabbo previously called on the city to allocate immediate funds for food pantries, and said that after sending a letter to the Commissioner of the New York State Department of Agriculture and Markets Richard Ball, they are finding that food from New York state farmers are being distributed to pantries to prevent food waste — but, he added “we have a long way to go.”

“One of the key words during the coronavirus has been essential, and what can be more essential than food?” Addabbo told QNS. “There’s such a need out there with people being unemployed, even pre-virus. But people like Jacob, they go from ordinary to extraordinary. Nobody tells them to do this, they want to do it, it’s in their heart to do something for people. So they step across that line, they become extraordinary people and what happens? People benefit and families get fed.”