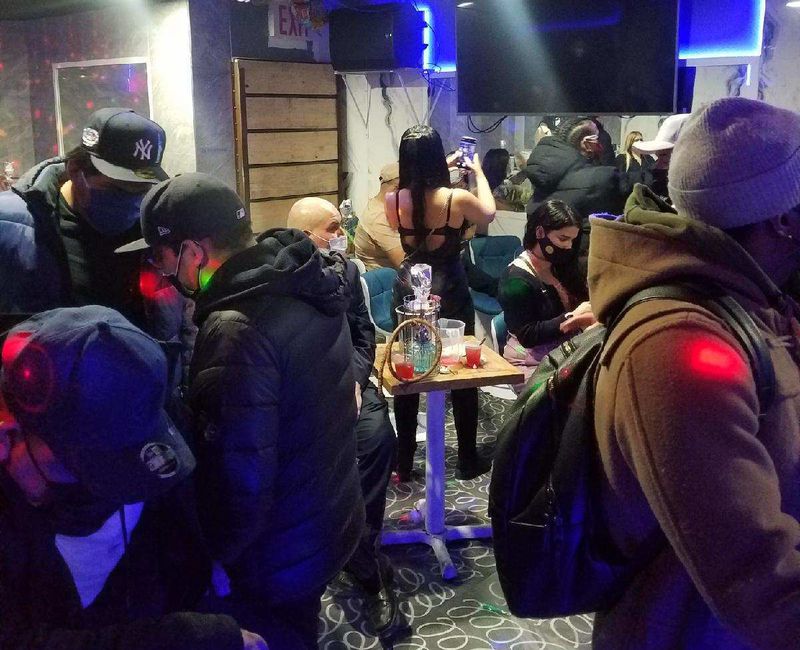 They fought for their right to party.

An illegal Queens club located in a basement was busted early Sunday after revelers behind fortified doors tried to keep authorities locked out, the New York City sheriff’s office said.

The sheriff and deputies were met with “immediate violence and resistance” when they tried to shut down the party on Roosevelt Ave. near 67th St. in Woodside around 12:30 a.m., officials said.

Deputies raided the building after watching guests sneak into a side door through construction scaffolding.

Once inside, officers realized the party was going on in the basement but the partyers wouldn’t stop to open the heavily fortified metal doors, officials said.

The sheriff’s office had to call in the FDNY, which battered down the thick doors, finding over 75 revelers drinking and smoking hookah, officials said.

An employee for National Grid, called to inspect the basement, discovered dangerously high levels of carbon monoxide inside the small room, officials said.

The owner of the club, Marco Chacon, physically tried to restrain sheriff deputies from entering the room and was arrested and charged with obstructing governmental administration, disorderly conduct, resisting arrest and organizing a nonessential mass gathering, officials said.

Neighbors said the place has been hopping for months, and they’re glad it was shut down.

“It’s too much people over there,” said Maria, 34, who would often see people lining up outside to go in. They’d signal her to keep quiet as she passed, she said.

Eileen Nazario, 56, said she never heard the din of the music, but she’d see revelers milling around the sidewalk in the wee hours as recently as three times last week.

Nazario said she tried to avoid them as she headed out to her hospital job at 6:20 a.m.

“I even cross the street, because I don’t want to be walking my way around them,” she said. The partygoers were usually in their 20s, and they were getting into their cars to go home in the morning.

“I don’t want to be looking at them, you know, eye to eye,” she said. “I was thinking they are intoxicated. I think they’re drunk because they are noisy, loud.

Chacon faces up to $15,000 in fines and potentially more if pending alcohol-related infractions are brought against him, officials said.

Some 63 partyers also face $1,000 tickets for partying during the COVID pandemic.

The United States saw its deadliest week of COVID yet in January, bringing the nation’s death toll to a staggering 416,000 deaths, more than American’s who died fighting in World War II, according to the CDC.

So far, 26,558 people have died from COVID in New York City, according to the CDC.