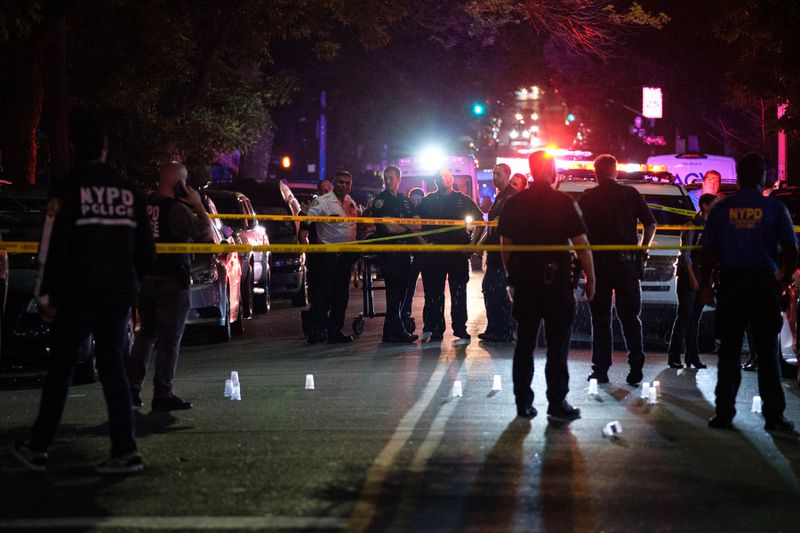 Patrolling cops came across a liquor store shooting in Brooklyn on Thursday night and killed the shooter in a wild exchange of gunfire, police sources said.

The officers, members of an NYPD Public Safety Unit, were in Bushwick near the intersection of Halsey St. and Wilson Ave. by Irving Square Park when they heard gunfire, said two police sources.

The gunfire came from Boardwalk Wine and Spirits, on Halsey St. a few steps south of the intersection.

Cops arrived just as the shooter fired at three people at the liquor store — two inside, and one seated outside in a canvas chair, said the sources.

“I was standing right there,” said a witness who declined to give his name. “He walked up and boom, boom, boom. He shot everybody. I started running. It was crazy, man.”

A plate glass window on the store’s front was shattered in the gunfire.

Realizing police were at the scene, the gunman began shooting at the cops as he ran up Halsey Ave. and then left onto Wilson Ave., said the sources.

“There were lots of gunshots — at least 15 gunshots,” said a worker at Jimmy’s Pizzeria, nearby on Wilson Ave.

“They seemed to be coming from different weapons,” the pizzeria worker said in a phone interview.

The cops returned the fire, and mortally wounded the shooter near the corner of Wilson Ave. and Weirfield St., across from the park about 350 feet from the liquor store, said the police sources.

He was found wounded between two cars.

A gun sources believed belonged to the shooter was visible outside the liquor store, atop the trunk of a gray Maserati automobile.

The shooter’s identity was not known early Friday. The three people he wounded at the liquor store did not suffer life-threatening injuries.

“Everything is taped off, and there are tons of police because there were multiple injuries,” the pizzeria worker said. “It was just shocking to hear so many gunshots.”

Police warned people to stay away from the area as they investigate.

The cops involved in the shooting were taken to Woodhull Hospital to be treated for ringing in their ears. They were not otherwise hurt, police sources said.