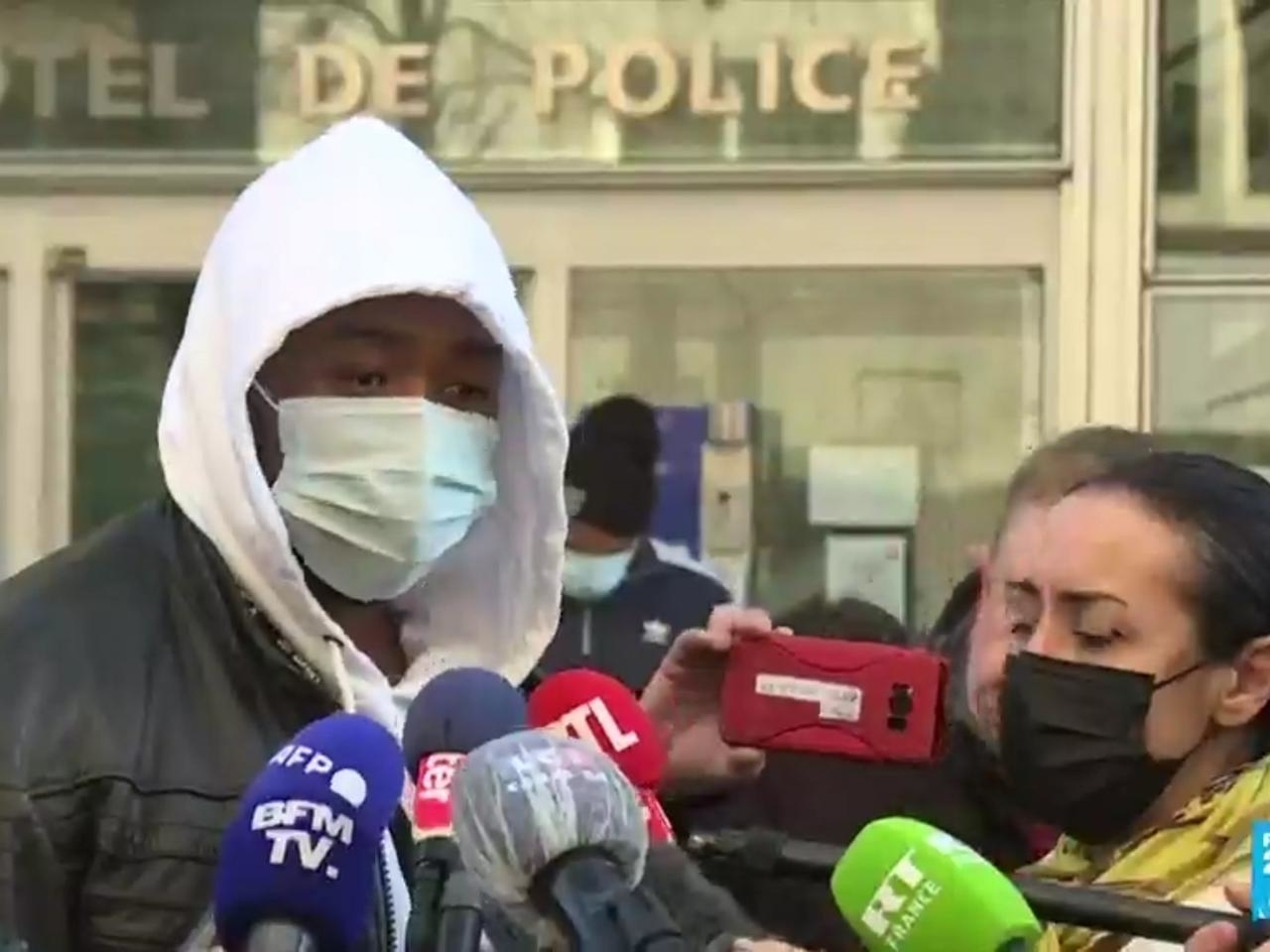 Video of Paris police officers brutally beating and using tear gas on a Black music producer has triggered outcry in France as the government continues to mull legislation that would put restrictions on sharing footage of security forces.

The violent incident occurred a week ago, though the public was only made aware on Thursday, when graphic video of the confrontation was posted online by French digital news outlet Loopsider. By the end of the day, more than 8 million people had watched, reigniting backlash sparked days earlier over clips of police forcefully clearing migrants from a protest camp in Paris.

The new video, taken from a security camera inside the Paris music studio of Michel Zecler, shows three officers punching and striking the producer with their fists and batons.

In an interview with Loopsider, Zecler said he spotted a police cruiser across the street from his studio on Nov. 21. He told the outlet he hustled inside because he feared being fined over not wearing a face covering, which has been made mandatory in France.

Video of the altercation kicks off with the police officers backing Zecler into the building, where they repeatedly insult him as the beating unfolds. One of the officers called him a “dirty n—–” in French, while striking him, he said.

The struggle in part was sparked by officers’ attempts to shut the door while the music producer fights to keep it open.

When a plainclothes cop wraps his arm around Zecler’s neck, he finally allows for the door to fall closed. The officers then take him to the ground while the music producer tires to alert a group of people in another room. Authorities did their best to block the door and continued to strike Zecler as others attempted to intervene.

The officers finally departed the studio when the group finally managed to push their way into the room, returning just moments later with backup.

The security footage then shows the music producer standing in his doorway as officers storm the studio and flood it with tear gas.

His lawyer, Hafida El Ali, said police detained Zecler on suspicion of violence against public authority, though the proceedings have since been dropped.

“Without the videos nothing would have come out,” Julien Bayou, the head of Europe Écologie — Les Verts, France’s Green party, said on Twitter.

“Videos that you want to ban. To protect police officers who carry out their mission with integrity? Or to guarantee the impunity of this behavior that dishonors the uniform?”

The new security bill pushed by President Emmanuel Macron’s government includes a provision that would result in a fine of about $54,000 for those who broadcast “the face or any other identifying element” of police officers in action if the goal is to “physically or mentally harm” them.

Critics have said the language is too vague and an attempt to prevent journalists and bystanders from documenting instances of police brutality.

“These videos are essential because initially my client was being detained … for violence against people with public authority,” El Ali said. “This is very serious. The reality is that if we didn’t have these videos maybe my client would be in prison.”

According to a report by Le Parisien newspaper, based on the written record of the officers’ declarations the day after the arrest, Zecler drew their attention because he was not wearing a mask. They said he seemed “nervous” and a “strong drug smell” was coming from him.

Officers added Zecler was getting “dangerous” toward them, but the music producer has denied wrongdoing.

In wake of the video’s release, Macron took to Facebook on Friday in a bid to quell backlash and criticisms over the recent event.

“The images of the attack against Michel Zecler that we have all seen are intolerable. They put us to shame,” the French leader wrote. “France must never allow hate and racism to thrive.”

Macron noted that he would be asking the “government to make prompt proposals that reaffirm the bond of trust that most naturally exits between the French and those who protect them and fight more effectively against all discrimination.”

“I believe in our freedoms, of which I guarantee,” he added.

The three officers involved have been suspended amid an investigation into the violent arrest.