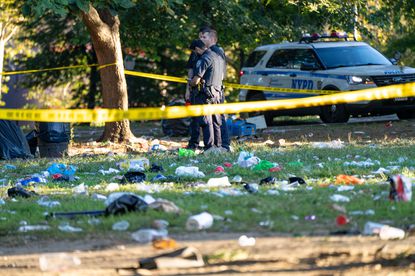 Four people were shot at a raucous barbecue in a Bronx park, leaving one victim dead and the others, including an 11-year-old boy, wounded, police said Sunday.

Shots rang out in Claremont Park near Teller Ave. and Mount Eden Parkway just before 11:15 p.m. Saturday after an argument broke out at the unruly cookout, cops said.

At least one of three men cops are looking for pulled out a gun and began to fire off shots into the crowd. The men fired off indiscriminate rounds into the sea of partygoers and took off, police said.

EMS rushed three of the victims to local hospitals. Later, a 22-year-old man walked into Lincoln Hospital with a gunshot wound to the leg.

A 22-year-old man EMS took to Bronx Care Health System died from a gunshot wound to the torso. His name was not immediately released.

An 11-year-old boy shot in the shoulder was in stable condition at Lincoln Hospital. A 24-year-old woman blasted twice in the torso and was in critical condition at the same hospital.

Cops recovered one gun at the scene, sources said.

Police are still looking for the men behind for the deadly gunplay. They were last seen fleeing in a white Nissan, cops said.