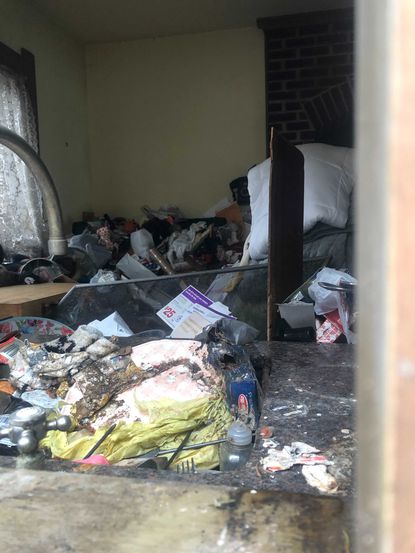 A 45-minute search by NYPD cadaver dogs failed to find a missing Queens woman entombed beneath her home’s floor-to-ceiling trash — likely due to the stench inside.

The police canines arrived for the second of two fruitless October visits to the hoarder’s garbage-packed home, one day after cops rescued 10 pets from the debris without spotting the remains of Emmy-winning set designer Evelyn Sakash, police said Thursday.

Sakash, 66, was finally found Tuesday by her sister after six months lost amidst the avalanche of trash piled throughout her College Point home.

The initial visit came after Sakash’s cousin from Nevada filed an Oct. 18 missing person’s report, with the cops removing four dogs and a half-dozen cats from the home and delivering the animals to a local shelter.

Officers in Tyvek suits spent 45 minutes digging through the rubble without setting eyes on the home’s lone resident, police said.

NYPD Emergency Service Unit officers returned the next day with cadaver dogs, again turning up nothing during another 45-minute hunt through the residence. Police suspected the debris and the garbage stench, in addition to the recently removed cats and dogs, prevented the cadaver dogs from locating Sakash in her kitchen.

According to a police source, cops were barred from clearing all the debris from the apartment without a court order because there was no indication that a crime was committed. Sakash was finally found by her heartbroken younger sister, which resolved the mystery of her disappearance.

Sakash was a highly-regarded set designer, working on Broadway, movies and television during a career in which she earned a 2003 Daytime Emmy for Outstanding Achievement in Art Direction/Set Decoration/Scenic Design for her efforts on the children’s television series “Between the Lions.”

The woman’s trash-packed home included a filthy sink full of dirty dishes, an empty pasta box and a stained washcloth. Family members were unaware of Sakash’s hoarding until her sibling visited the house and came upon her body in the kitchen.

A tearful Ellen Brown, 60, recalled her sister’s acclaimed career working for Disney and MTV, along with stints on the hit cable television shows “Billions” and “Orange is the New Black.” And Brown found it hard to reconcile Sakash’s lonely demise with the rest of her popular sister’s time in New York.

“She had a full life,” the sister recalled. “She was so extraordinarily talented. She was a brilliant mind … I don’t want my sister to be remembered like that, like the way she was found.”

Family and friends raised $5,000 to pay investigators in their hunt for Sakash, unaware that she never escaped her own home.

Sakash fell into a downward spiral after the death of her mother one year ago, said Laraine Memola, a friend and neighbor.

“Evelyn always took care of her mom — her mom was here in College Point, in a nursing home,” Memola said. “She’d always bring her food.”

“Between the pandemic, her job, her mom — it hit her hard,” said Memola. “Her mom’s funeral was at the height of the pandemic and it was only her, a friend, and her nephew.”

“Evelyn was suffering — she lost a lot of weight,” said Memola. “People would say to her ‘Are you OK?’”

“I am so upset because I’m a single woman … Just the thought of someone with an illness being left like that for six months until they find the body is just awful,” Memola said. “We don’t know what happened to her — if she suffered, if she died right away.”