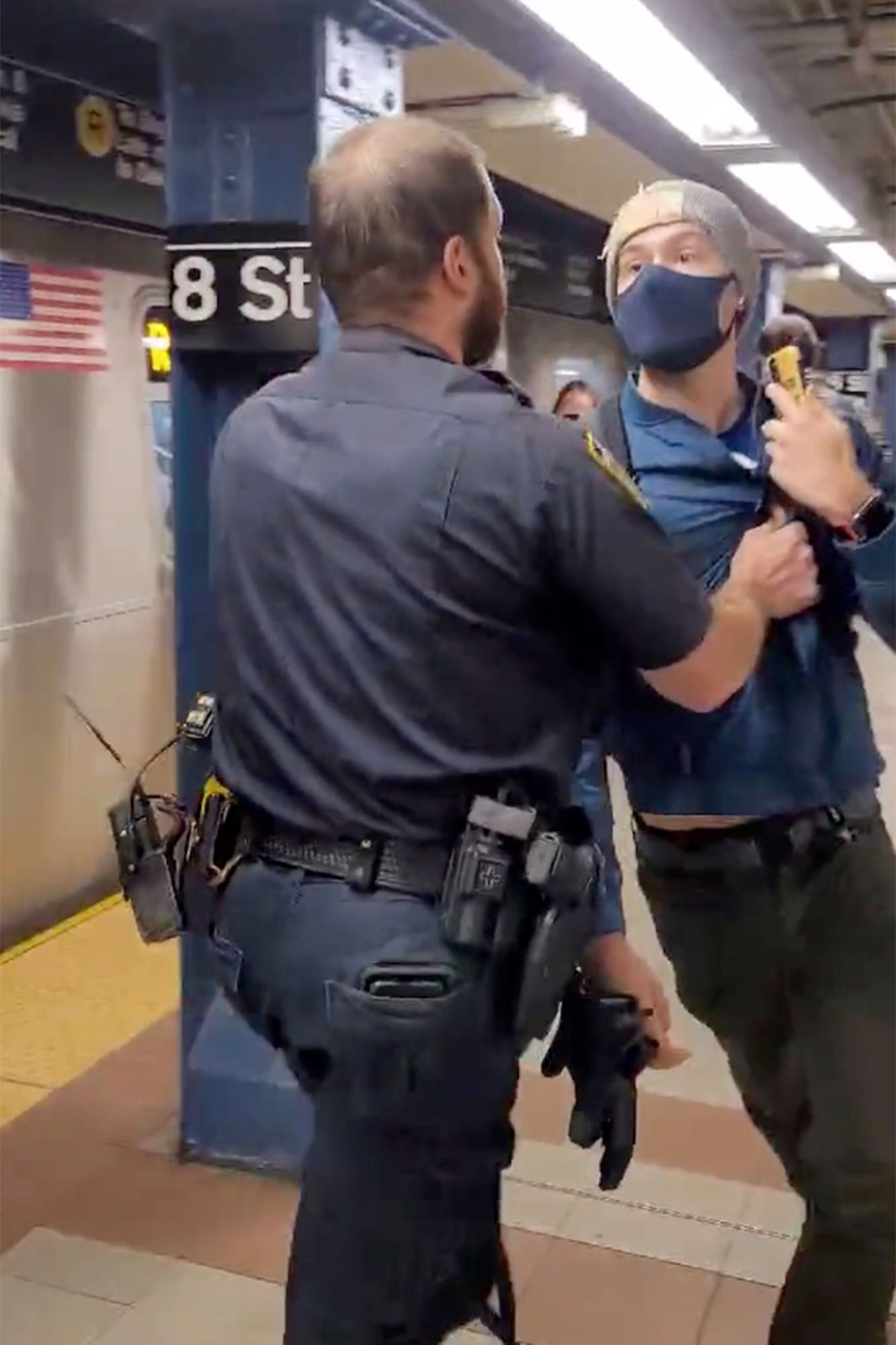 A pair of unmasked NYPD cops shoved a straphanger out of a Manhattan subway station on Tuesday after he says he repeatedly asked them why they weren’t following a state rule that requires people to cover their faces in mass transit facilities.

Andy Gilbert, 27, said he got off his downtown W train at 8th St. in the East Village around 8:40 a.m. when he saw the cops standing on the platform without masks.

“Recently I started doing short videos whenever I see that and ask why the cops aren’t wearing masks,” said Gilbert, who lives in Queens.

“This morning I did the same thing. I asked both of them if they realize it’s illegal to not have a mask on in the subway. I asked, ‘Why don’t you just put on a mask?’”

A state rule that took effect in September 2020 requires everyone to cover their faces on the subway or face a $50 fine.

“The male officer kept saying he couldn’t hear me through my mask,” said Gilbert. “Eventually the back and forth went on for two or three minutes. The male officer declared that I was being disruptive.”

At this point, the officers — who Gilbert identified by their badge numbers as Joseph Vincent and Grace Rosero Tapia — shoved the querying straphanger out the station’s emergency gate.

Video posted on Twitter shows a male officer pushing Gilbert toward the gate. A female officer pushed the gate open as the male pushed Gilbert out of the platform area. The video doesn’t show the confrontation that led up to that incident.

#NYC #NYPD harassing this subway rider for having the nerve to ask them to put on masks! #notabovethelaw@NYCMayor pic.twitter.com/iEK8qKh0MF

An NYPD spokesperson said the incident is under internal review.

Gilbert said he regularly sees cops flouting the state’s mask requirement in the subway — and has never seen officers crack down on riders who fail to wear masks.

Metropolitan Transportation Authority officials have over the last 15 months pushed for mask usage so more New Yorkers feel comfortable riding the the subway. The MTA regularly holds “mask force” events in which volunteers and agency leaders hand out masks to riders in trains and stations, and asks those who are unmasked to cover their faces.

The MTA last month announced a crackdown on riders who decline to wear their masks in transit after the agency’s internal police force issued just 41 summonses for the violation over the first year the policy was in effect.

It’s unclear whether the NYPD has enforced the mask requirement at all. NYPD representatives said the department does not track data “to that level of specificity.”

”I’ve had police threaten me a few times for asking them why they’re parked in bike lanes, but I’ve never had any cop physically assault me,” Gilbert said.

“Cops don’t care about the law,” said Gilbert. “They just do whatever they want and there’s no accountability.”