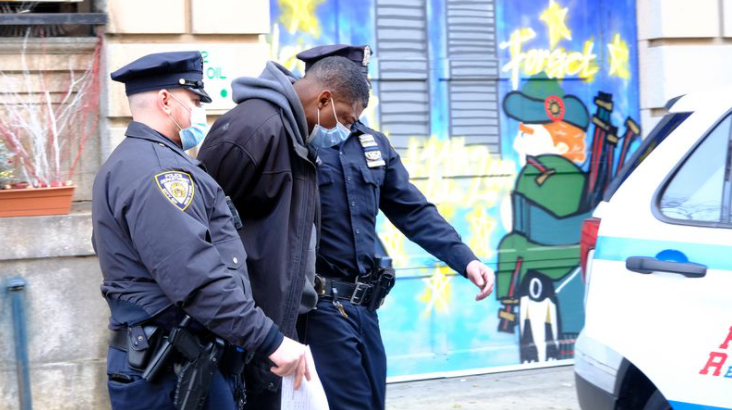 NYPD cops interrupted a rape in progress on a Manhattan street, pulling a 61-year-old sex offender off a stranger he was brutalizing early Wednesday, police said.

Officers responding to a 1:37 a.m. 911 call about a man beating a woman caught the suspect raping the 23-year-old victim under scaffolding at a construction site on W. 28th St. near Eighth Ave. in Chelsea, police said.

Darryl Phelps, who is 6 feet tall and 200 pounds, allegedly had his hands around the woman’s neck as he sexually assaulted her, a police source said.

Officers pulled him off the woman and charged him with rape, criminal sex act, sex abuse and assault.

The woman told police she was walking home from work when the suspect slugged her in the face, bruising her right eye, and raped her. She was taken to Lenox Health Greenwich Village.

At his arraignment in Manhattan Criminal Court — where Judge James Clynes ordered Phelps held in jail without bail — prosecutors cited a criminal complaint stating Phelps bizarrely claimed “That’s my girl. You know, that was consensual… That wasn’t rape.”

Then at the precinct, Phelps asserted the victim “wanted to go to her place, where we were recording and we were doing our thing,” adding: “We had sex. Nothing happened,” the complaint stated.

Phelps, who has seven aliases, according to records, is listed as a Level 2 registered sex offender.

He was paroled Sept. 9 after serving 23 years in prison on a 21-year-to-life sentence for burglary and attempted rape in Manhattan.

In that case, he followed a 33-year-old woman into her building, forced her into her apartment, then tried to sexually assault her, records show. After locking her in the bathroom, Phelps stole personal items from the apartment and then ran off.

That attack occurred on July 11, 1997 — less than a week after he was paroled after serving nearly nine years for an attempted robbery conviction, also in Manhattan.

Before that, he served almost two years in prison for a Bronx attempted burglary conviction. He was paroled in May 1987.

Records also show that before his most recent release in September he represented himself in a lawsuit in which he argued in vain that he should be freed to avoid the risk of getting COVID-19 while behind bars at the Gouverneur Correctional Facility upstate.

Phelps’ next court appearance was set for Dec. 27.

Through Sunday, Chelsea’s 10th Precinct has seen 11 rapes reported this year compared with six by the same point last year, an 83% spike.

Citywide, the NYPD has investigated 1,453 rapes this year through Sunday, compared with 1,410 during the same period last year, a 3% rise.