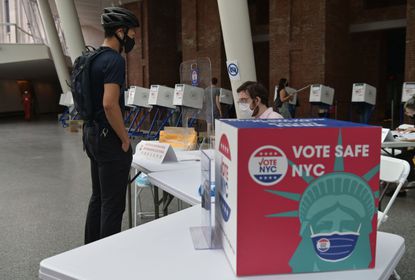 It’s going to take a minute.

The winner of New York City’s long-awaited Democratic mayoral primary is unlikely to be crowned on election night Tuesday due to the freshly implemented ranked-choice voting system — and final results aren’t expected until mid-July, according to elections officials.

Once polls close at 9 p.m. Tuesday, the Board of Elections will only release unofficial results of the top-ranked choices on ballots cast in-person during early and day-of voting, the city’s campaign finance board said in a statement.

Unless a candidate clinches a simple majority of that first batch of votes — which appears unlikely if polls are to be trusted — the Board of Elections will move on to counting the lower-ranked picks on in-person ballots, the CFB said. However, those tabulations won’t be released until June 29 — a whole week after primary day, according to the CFB.

New Yorkers will hopefully have a good idea of who won the mayoral primary once the ranked-choice results are in.

But the Board of Elections will still have counting to do.

On July 6, the Board of Elections will provide an updated tally that includes some absentee and affidavit ballots, the types of votes that are cast by mail or provisionally due to registration issues, the CFB said.

Finally, at some point of the week starting July 12, the Board of Elections will release final, certified results that include all absentee and affidavit ballots, according to the CFB.

According to recent polls, Eric Adams, Andrew Yang, Maya Wiley and Kathryn Garcia have emerged as the top contenders for the Democratic nomination to replace Mayor de Blasio.

With that many front-runners, the ranked-choice system — which has never previously been used in New York — is expected to play a significant role in determining the winner.

Whoever wins the Democratic primary is all but certain to become the next mayor, though he or she will still have to square off against the Republican Party’s candidate in the Nov. 2 general election.