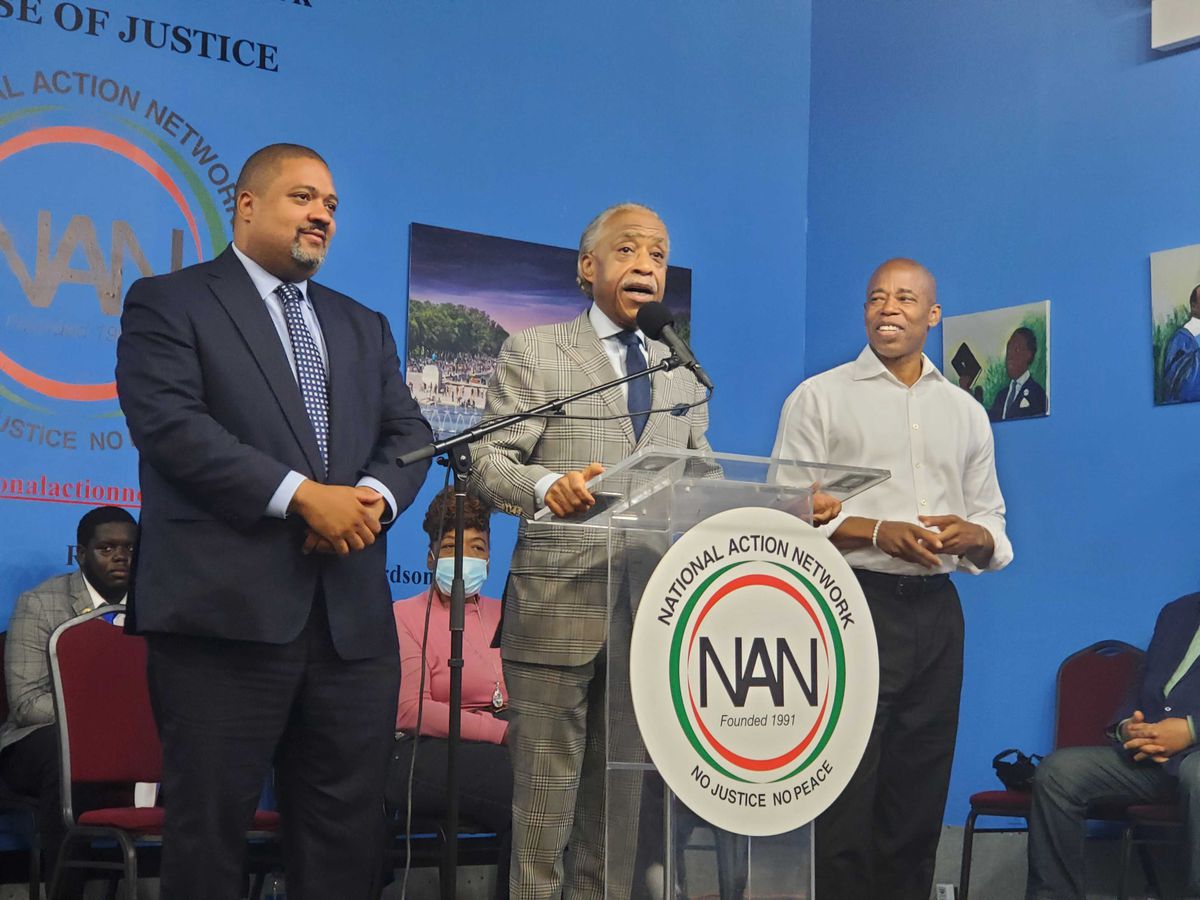 They stood together Saturday on a Harlem stage: a retired NYPD captain and a veteran civil rights activist who has spent much of his career railing against police misconduct.

NYC mayoral frontrunner Eric Adams and the Rev. Al Sharpton traded compliments about the Democratic primary victory that has taken the Brooklyn borough president to the brink of City Hall.

“As we moved through fighting for justice … we were nurturing who I was supposed to become,“ Adams told a crowd of activists at Sharpton’s National Action Network headquarters. “When I get there I won’t be just another Black face in a high place.”

Sharpton reminisced that Adams is a founding member of NAN who had to work his way through the political ranks to the state Senate and borough hall.

“He didn’t get where he’s gotten without tribulation,” Sharpton said.

The pair are longtime allies who on the surface seem a odd political couple.

Adams is a retired cop who regularly pointed to fear of rising crime as a reason to install him in City Hall. Sharpton has spent most of his life warning about the dangers of law-and-order rhetoric to minorities in New York and nationwide.

Now Adams, a founding member of NAN, is a prohibitive favorite to beat Republican nominee Curtis Sliwa in the November general election and take the reins of the nation’s largest city and biggest police force.

Adams urged the crowd to celebrate his primary victory.

Sharpton reminisced that Adams helped him file the paperwork to found NAN.

The civil rights leader said he briefed President Biden last week on Adams’ primary victory, which he said could provide a template for other Democrats.

He chalked up the former police captain’s victory to his ability to run as a unifying candidate with a strong base among Black and Latino voters.

“New York City is on the precipice of a historic move,” Sharpton said. ”It is not a black move or a white move or a brown move. It is a move for everybody.”

Sharpton also hailed Alvin Bragg, the Democratic nominee for Manhattan district attorney, who appeared alongside him and Adams.

Also a prohibitive favorite to win in November, Bragg would become the first Black person to hold the powerful position.

Bragg said he would be the first Manhattan DA to experience being accosted at gunpoint three separate times by cops, and to have a formerly incarcerated relative live in his home.