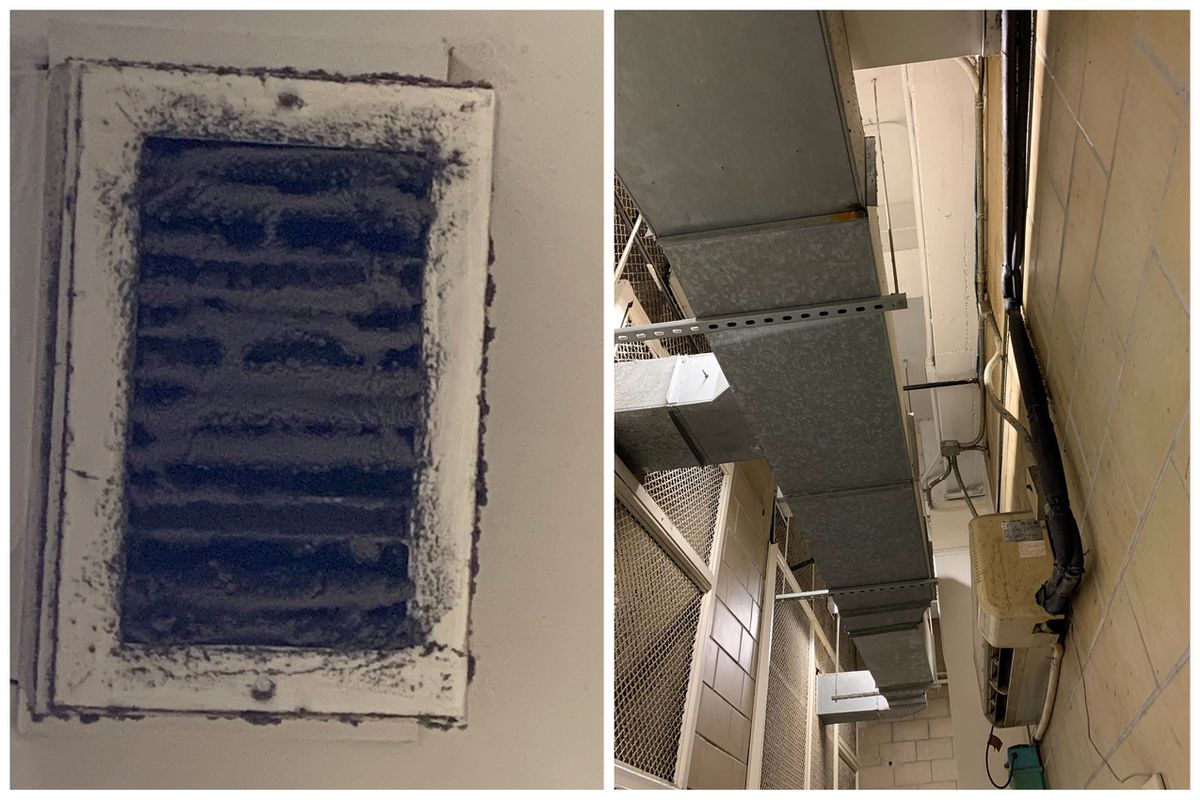 Manhattan court staffers are back at in-person work — and it’s the same dingy, dirty mess they left 16 months ago.

After being forced to work remotely because of the COVID-19 pandemic, staffers returned to non-public courthouse areas that haven’t gotten a lick of paint in years, lack critical ventilation upgrades and haven’t even gotten a decent cleanup, photos shared exclusively with the Daily News show.

With the delta variant risk still looming, court workers and visitors alike must stay masked up and keep 6 feet apart — signage posted in the sprawling and ornate courtrooms guide them safely through the space.

But behind the scenes in one of the city’s busiest court parts — AR1, in Manhattan — moldy chairs, dirt-splattered walls, and air intake vents black with soot are the norm in a meeting room where those arrested see and speak with their lawyers for the first time.

“I’ve been there 20 years,” said veteran defense attorney Julie Sender after seeing the photos. “Those stains have been there for as long as I can remember.”

The pictures depict what the courthouse’s non-public areas have been like throughout the pandemic, and according to those who frequent them, they’re the same as they’ve always been. Multiple courthouse workers said the sections that prisoners are moved through are notoriously disgusting and insufferably stuffy.

Several people familiar with the back-of-house areas said the poor conditions just behind the courtroom walls, where defense lawyers meet their clients before an arraignment to talk about the charges against them, posed a hazard to courthouse occupants even in pre-pandemic times.

“These are historically unsanitary conditions, and the information that we have been able to get from (the Office of Court Administration) and other agencies doesn’t provide as much information about what they’ve done in the non-public areas … like these interview areas and the holding cells and everywhere else,” said Lisa Ohta, the president of the Legal Aid Society’s lawyers’ union.

Ohta said public defenders saw the dirty evidence for themselves when they returned to work in person on reopening day.

“We’re seeking basic assurances and reasonable preventative measures like social distancing and masks. Ensuring that these spaces are properly cleaned. I mean, these are imminently reasonable requests,” Ohta added.

In March, The News reported that the city-run Department of Citywide Administrative Services, which owns and maintains the city’s 55 court buildings, had declined to equip holding cells with new ventilation systems even as it outfitted neighboring courtrooms with upgraded facilities. A spokesperson for the agency’s commissioner Lisette Camilo said the reason was out of safety concerns for DCAS cleaning staff.

A source who regularly frequents the non-public areas in question, who spoke candidly on the condition of anonymity, said juvenile delinquents — who can be as young as 7 years old — are held in the same parts of the courthouse described as roach- and rodent-infested.

Sender also said that while doing her job remotely, she found it hard to believe her clients in custody were placed in these areas.

“I could see sometimes when I’m talking to somebody — and these are small cells — that there’s like at least three or four people in the cell, so they’re through with the social distancing,” she said.

In a statement, a spokesman for DCAS said its cleaning employees lack keys and access to the holding cells and other non-public areas because of special security precautions in place. They said OCA, the Department of Correction and the NYPD are responsible for the out-of-bounds areas, adding nobody from those agencies requested that they be cleaned or upgraded with DCAS.

The News requested a tour of the holding cells where male defendants are held, the area where women and children are detained, and the attorney-client meeting booths.

Three OCA staffers and a city corrections sergeant accompanied a reporter on Friday morning for a brief visit to the attorney-client room, which appeared to have been given a wipe-down when compared with photos provided to The News taken several days before.

“These deplorable conditions are nothing new. The city has wholly failed in its commitment to keep these areas sanitary, and this failure, in our opinion, is indicative of how administration after administration views our hard-working staff and the New Yorkers that we represent,” said Luongo.

“This level of incompetence is truly disgraceful, and we demand immediate action from City Hall to keep these areas clean and safe for our staff and their clients.”