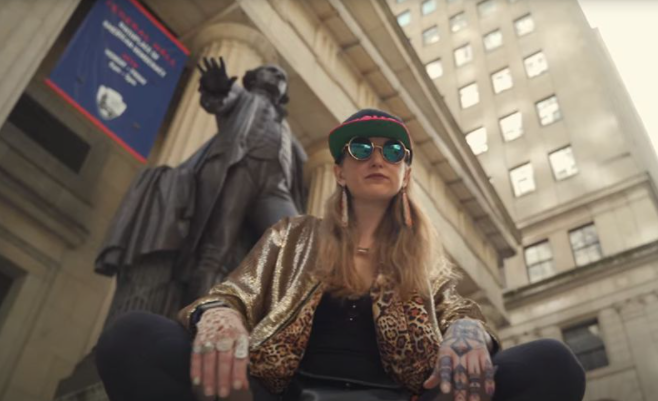 A record seizure of $3.6 billion of stolen Bitcoin accompanied the Tuesday arrests of a Manhattan husband and wife for their roles in a lucrative and unprecedented 2016 cryptocurrency hack of a virtual currency exchange, authorities announced.

Defendants Ilya Litchtenstein, 34, and Heather Morgan, 31, were taken into custody for conspiracy to launder the Bitcoin linked to the company Bitfinex, with the couple accused of using an assortment of sophisticated methods and bogus identities to cash in on the lucrative scam.

“Federal law enforcement demonstrates once again that we can follow money through the blockchain, and that we will not allow cryptocurrency to be a safe haven for money laundering or a zone of lawlessness within our financial system,” said Assistant Attorney General Kenneth Polite.

Morgan, in a bizarre 2019 music video shot in Manhattan’s Financial District, sported sunglasses and baseball cap reading “0FCKS” as she rapped of her status as the “mother-f—ing crocodile of Wall Street, always be a goat and not a god–mn sheep.”

In a post accompanying the nearly four-minute video, Morgan — rapping under the name “Razzlekhan” — explained she was “a bad–s CEO and female rapper.” She also described herself as Genghis Khan “but with more pizzazz.”

According to authorities, the Manhattan couple conspired to launder the crypto-windfall after a hacker breached the Bitfitnex platform and made more than 2,000 unauthorized transactions before sending the bitcoin to a digital wallet controlled by Lichtenstein — a citizen of Russia and the United States nicknamed “Dutch.”

The stolen cryptocurrency, worth about $71 million at the time, was now valued at $4.5 billion, officials said. The married defendants were charged with conspiracy to commit money laundering and conspiracy to defraud the United States, and face a possible maximum prison sentence of 25 years.

Authorities said the pair’s coverup included the use of multiple laundering techniques, including automated transactions and U.S.-based business accounts to make their banking appear above board. The investigation included federal authorities in Washington, Chicago and New York, along with police in Ansbach, Germany.

They were not charged in the Bitfinex hack. And authorities said millions of dollars in transactions were cashed out through bitcoin ATMs and spent on items from non-fungible tokens as to Walmart gift cards for personal expenses, prosecutors said.,

The investigation eventually led authorities to access an online account controlled by Litchtenstein, leading to the discovery of a “private key” to the digital wallet and the recovery of more than 94,000 bitcoin valued at $3.6 billion.

“The department once again showed how it can and will follow the money, no matter what form it takes,” said Deputy Attorney General Lisa Monaco.