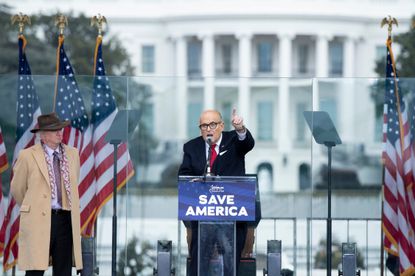 The New York State Bar Association is looking to revoke Rudy Giuliani’s membership, launching a review of comments made by the longtime Trump lawyer that fueled the Capitol riots.

The organization cited Giuliani’s speech before a crowd of pro-Trump supporters in Washington, D.C. last Wednesday, in which the former New York City mayor said, “Let’s have trial by combat,” as a reason for inquiry.

“We must address the root cause of this abhorrent incident, the blame for which lies first and foremost with President Donald Trump. But the president did not act alone,” the association said Monday in a statement. “Hours before the angry mob stormed the Capitol walls, Trump’s personal attorney, Rudolph Giuliani, addressed a crowd of thousands at the White House, reiterating baseless claims of widespread election fraud in the presidential election and the Georgia U.S. Senate runoffs.”

“NYSBA has a responsibility to defend and protect the rule of law,” the statement continued. “Based on these complaints, and the statement Mr. Giuliani uttered shortly before the attack on the Capitol, NYSBA President Scott M. Karson has launched an inquiry pursuant to the Association’s bylaws to determine whether Mr. Giuliani should be removed from the membership rolls of the Association.”

The association said it has received hundreds of complaints about Giuliani over the last few months for helping Trump “cast doubt on the veracity of the 2020 presidential election.”

“No person who advocates the overthrow of the government of the United States, or of any state, territory or possession thereof, or of any political subdivision therein, by force or other illegal means, shall be a member of the Association,” the organization said.