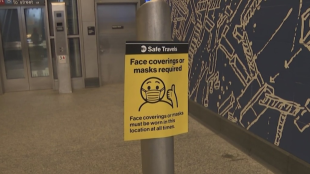 New York City entered Phase 1 of reopening Monday – the last region in the state to reach the milestone.

The mayor said part of a successful restart is making sure people can safely commute to work.

He said the city plans to make the 14th Street busway permanent and add another 20 miles of busways and bus lanes to help more than 750,000 residents get around.

He also said the city will increase rush-hour service on the Staten Island Ferry to every 20 minutes. There will be social distancing markers, along with free hand sanitizer and face coverings.

As for the subway, the mayor said approximately 800 school safety agents are being deployed to stations, where they will help educate riders about the new safety measures.

Both he and Gov. Andrew Cuomo have said they plan to ride the subway.

“We need to show people that we think some really important work has been done to make subways and buses safe,” de Blasio said.