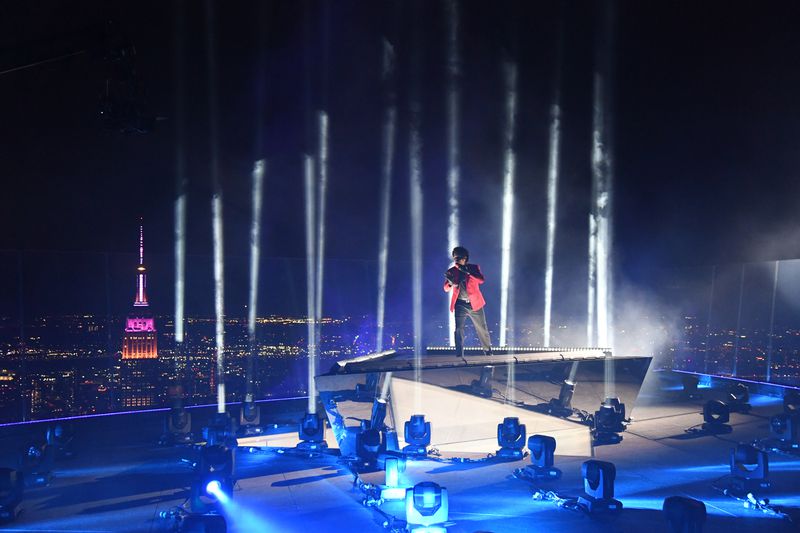 The MTV Video Music Awards took the city by storm Sunday, raining victory on Lady Gaga and Ariana Grande after a powerful BLM-inspired performance by DaBaby and calls for “justice” from The Weeknd.

“We dedicate tonight’s show to a man whose spirit touched so many,” she said, calling Boseman a “true inspiration to all the fans he touched.”

The Weeknd gave the first live performance of the night, roaming from a subway platform to the Edge observation deck 1,000 feet above Manhattan.

He appeared onstage with what looked like the same bruised face and bloody nose he got after a car crash and beating in the video for “Blinding Lights.”

Last week’s police shooting in Kenosha, Wisconsin, was mentioned multiple times during the show, first by Palmer and later as The Weeknd accepted his two awards for video of the year and best R&B.

“We can never tolerate police brutality or any injustice,” Palmer said. “We must continue the fight to end systemic racism.”

The first award of the night – best collaboration – went to Grande and Gaga for “Rain on Me,” the first of several for the pop icons.

They went on to win song of the year and best cinematography for the hit, which they performed live while wearing masks in Gaga’s first return to the VMAs stage since 2013.[More Snyde] Lady Gaga celebrates her five VMA wins with funny photos »

“Me and Ariana are truly soul sisters,” Gaga said. “Ari, I love you. I feel like when we were in the studio, we turned our tears that felt like endless rainfall into diamonds.”

The New York-born singer thrilled with her eccentric masks and frequent outfit changes. She wore a mask with horns, one that resembled a fish bowl, a silver mask with wispy antlers and a pink mask that looked like a mouth cage with googles.

“This has not been an easy year for a lot of people. But what I see in the world is a massive triumph of courage,” she said.

Rapper DaBaby gave an electrifying performance of his hits “Peep Hole,” “Blind” and “Rockstar,” rapping from the back of a police car while handcuffed and atop the cruiser with a city burning in the background and a “Stop Killing Us” protest poster.

In his two acceptance speeches, The Weekend used his spotlight to call for justice after white police officers in Kentucky and Wisconsin shot unarmed Black people this year.

“It’s really hard for me to celebrate right now and enjoy this moment, so I’m just gonna say justice for Jacob Blake and justice for Breonna Taylor,” The Weeknd said in his first speech before repeating the sentiment after winning the show’s top honor, video of the year.

Blake is the 29-year-old unarmed Black man who was shot seven times in the back by a police officer in Kenosha, Wisconsin, on Aug. 23 as he walked away from an alleged domestic dispute. The shooting left him paralyzed.

Taylor, 26, is the Black EMT who was shot to death in a botched no-knock police raid on her home in Louisville, Kentucky, in March.

Taylor Swift won best direction for her video for “The Man.”