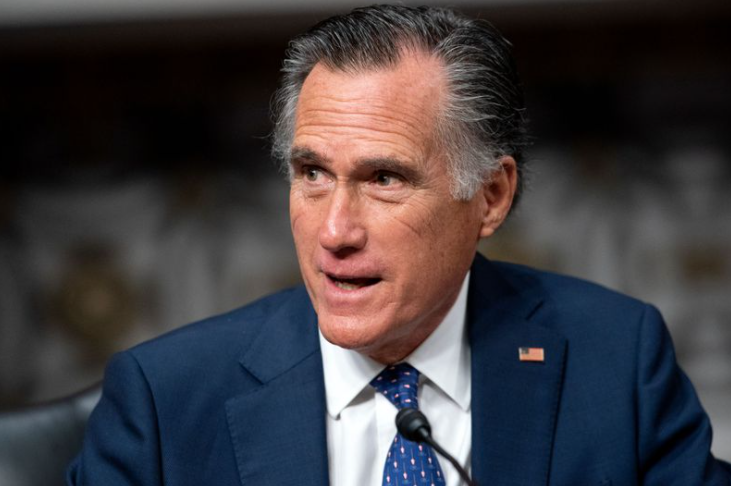 Sen. Mitt Romney implied Sunday that some of his fellow Republicans are “morons” treading dangerously close to treason after Reps. Marjorie Taylor Greene and Paul Gosar appeared at a white nationalist conference helmed by someone the U.S. government itself has branded a white supremacist.

“There’s no place in either political party for this white nationalism and racism,” Romney (R-Utah) told CNN’s Dana Bash on “Face the Nation, calling it evil and questioning their mental competence. “It’s simply wrong.”

As most GOP leadership aside from Rep. Liz Cheney continued to remain mum, Romney said anyone who would support white nationalists and despots is “missing a few IQ points.”

Greene made a surprise appearance at the America First Political Action Conference on Friday, taking the stage just after founder Nick Fuentes praised Russian president Vladimir Putin’s invasion of Ukraine, according to The Daily Beast. After she spoke, Fuentes compared Putin with Adolf Hitler — favorably.

“And now they’re going on about Russia, and ‘Vladimir Putin is Hitler’ — and they say that’s not a good thing…” Fuentes said, according to The Daily Beast. “Can we get a round of applause for Russia? Yes!”

Gosar spoke for the second straight year in a scheduled appearance, the first sitting member of Congress to have appeared there at all.

“Marjorie Taylor Greene and Paul Gosar, I don’t know them, but I’m reminded of that old line from the ‘Butch Cassidy and the Sundance Kid’ movie where one character says, ‘Morons. I’ve got morons on my team,’ ” Romney said. “And I have to think anybody that would sit down with white nationalists and speak at their conference was certainly missing a few IQ points.”

He said he assumed their motivation was to deliver shock value, and that it would “get them more eyeballs, and maybe make a little more money for them or their network,” he added. “It’s disgusting. And I’m hopeful that you’re seeing some of those people recognize just how wrong they were.”

“It’s unthinkable to me. It’s almost treasonous. And it just makes me ill to see some of these people do that.” – Sen. Mitt Romney reacts to pro-Putin sentiments from GOP members and some media outlets: https://t.co/S6ESuaj46b #CNNSOTU pic.twitter.com/ZPDC3bGMgI

Greene rebutted criticism in a statement Sunday laced with religious references and accused the Democratic party of having an “obsession with skin color, sexuality and gender.”

She praised Ukraine for resisting the Russian invasion, though she did not address Fuentes’ stated admiration for Putin. Instead Greene tried to point fingers elsewhere.

“We’re not going to be deterred by journalists and Washington insiders who fear the name of Our Lord, and relentlessly attack those of us who proclaim His name. We know that Christ is our only judge,” Greene said in a statement. “The Pharisees in the Republican Party may attack me for being willing to break barriers and speak to a lost generation of young people who are desperate for love and leadership. But I won’t abandon these young men and women, because I believe we need to do better by them.”