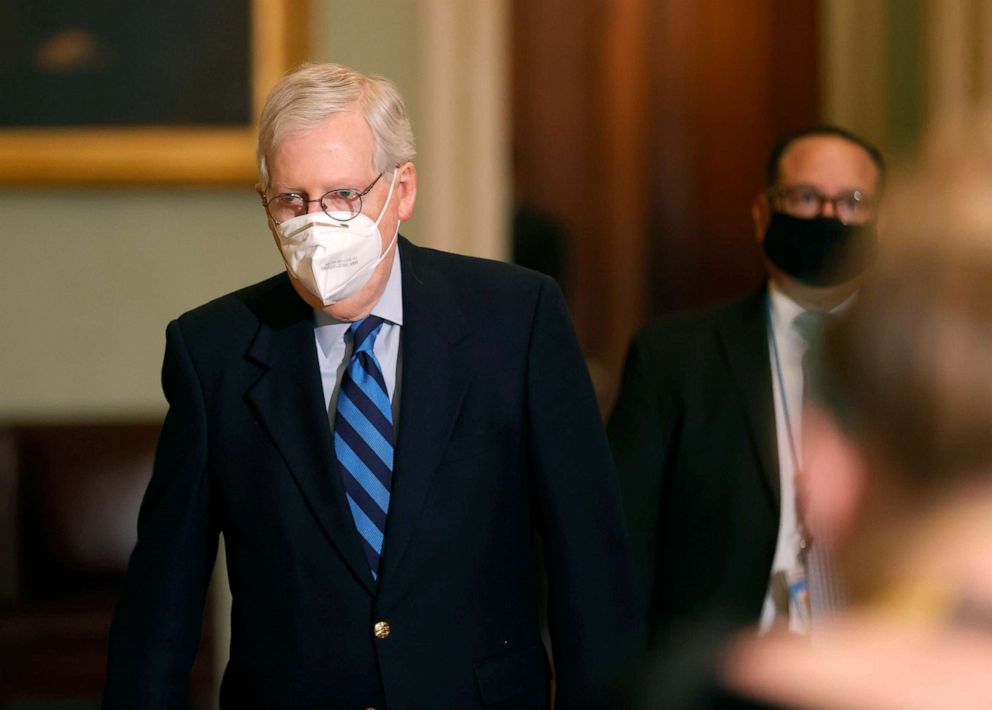 President Trump “provoked” the violent attack on the U.S. Capitol by feeding his supporters a steady stream of “lies” about the election he lost, Senate Majority Leader Mitch McConnell (R-Ky.) said Tuesday, throwing Trump all the way under the bus as lawmakers prepare for his impeachment trial.

McConnell, once Trump’s most powerful ally on Capitol Hill, lobbed the harsh rebuke as he reconvened the Senate for the first time since Congress certified Joe Biden’s election in the chaotic aftermath of the Jan. 6 attack.

“The mob was fed lies,” McConnell said on the Senate floor. “They were provoked by the president and other powerful people, and they tried to use fear and violence to stop a specific proceeding of the first branch of the federal government which they did not like.”

Indeed, Trump told thousands of hardcore supporters to march on the Capitol and “fight like hell” to stop the congressional certification of Biden’s victory, triggering the blood-curdling assault that left five people dead, including a police officer.

The floor speech marked the first time McConnell unambiguously blamed Trump for the riot, suggesting he could be open to voting to convict him when the Senate puts him on trial on an incitement of insurrection impeachment charge later this month.

McConnell, who has told associates he was pleased the House impeached Trump last week for instigating the assault, suggested he’s ready to cut all ties with the president he supported and worked closely with for four years.

“Tomorrow, President-elect Biden and Vice-President-elect Harris will be sworn in. We will have a safe and successful inauguration right here on the west front of the Capitol — the space that President Bush 41 called ‘democracy’s front porch’ — and then we’ll move forward,” McConnell said.

The start date of Trump’s trial has not yet been set, but Senate Democrats, who are about to regain majority control of the chamber, are likely to press ahead rapidly.

“We got three things we got to do quickly — impeachment, nominations, COVID,” said Sen. Chuck Schumer (N.Y.), who will take over as majority leader once Georgia’s two new Democratic senators are sworn in, which is expected on Wednesday after Biden’s inauguration.

If convicted, the Senate can separately approve a resolution to prohibit Trump from ever running for office again by a simple majority vote, providing reason to pursue the trial despite his already being out of office.

At Trump’s last impeachment trial, just one Republican senator, Mitt Romney of Utah, voted to convict him, resulting in acquittal.

This time around, however, there’ll likely be broader support for conviction in the GOP ranks, with moderate Republican Sens. Susan Collins of Maine, Lisa Murkowski of Alaska and Ben Sasse of Nebraska signaling they’re likely to be onboard.

Trump already made history by becoming the only president to be impeached twice by the House last week. If the Senate adopts the article, he’ll make history again, as the upper chamber has never before convicted a president.

Banned from Twitter, Trump did not react to McConnell’s rebuke, instead spending his last full day in office preparing to issue dozens of pardons and sentence commutations.