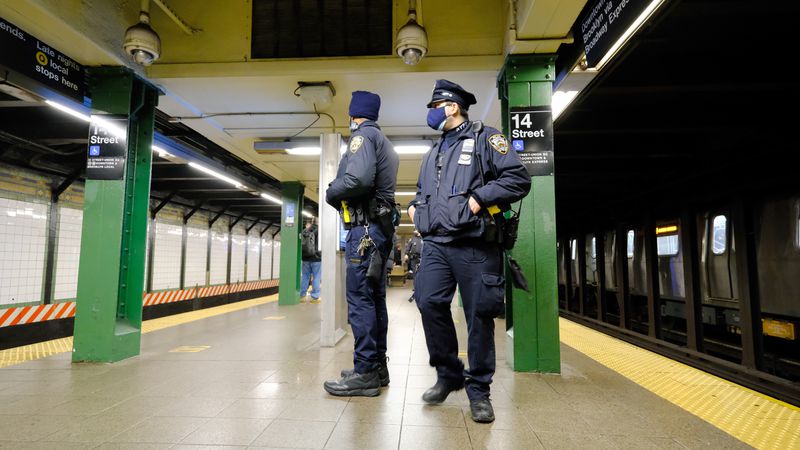 New York City’s next mayor will inherit a host of complex problems when he or she steps into office Jan. 1 — the pandemic, cratering revenue and reforming policing, to name just a few — but there’s one pressing issue that’s been given relatively short shrift on the campaign trail so far: crime.

But so far, most of the top-tier candidates running for mayor have spent relatively little time addressing how they would handle the NYPD through the lens of how they would directly address crime. Instead, they’ve focused much more of their attention on reforming the Police Department.

That comes as little surprise.

The death of George Floyd at the hands of a Minneapolis police officer and the protests that followed last summer justifiably made police reform one of the top issues for anyone running for office. That dynamic is even more pronounced in a New York City Democratic primary, which attracts more liberal voters and will most likely decide who ultimately becomes the next mayor.

How to address crime, though, is also on the minds of many New Yorkers. This became even more clear recently when a homeless man traveling on the A train went on a murderous rampage, stabbing four people and killing two of them.

“Outside of Eric Adams, I don’t think any of these candidates necessarily feels all that comfortable talking about crimefighting measures or anti-gun-violence strategies,” said veteran political consultant Neal Kwatra. “They don’t have to be experts, but they are going to need to articulate a philosophy and world view on combating crime and gun violence effectively. For a not insignificant cohort of voters in this primary, that will matter a lot.”

Though the candidates might not be spending that much time talking about it yet, New Yorkers’ concerns that violence could spiral out of control is not exactly lost on them. Nor is the fact that violent crime is rooted in other problems that don’t lend themselves to easy solutions — problems like homelessness, education, caring for the mentally ill and how to restore the city to a footing that resembles prepandemic times.

The Daily News reached out to several of the top mayoral candidates running in the June 22 Democratic primary. Here’s what they have to say about how they’d address crime if elected:

Brooklyn Borough President Eric Adams is a former NYPD captain who made waves during his years on the police force for speaking out against its treatment of Blacks. A recent poll ranks him second among voters — behind Andrew Yang.

To address crime, one of his first orders of business will be reconstituting the controversial anti-crime unit of plainclothes cops “the right way.” That unit was previously tasked with tackling violent crime and was disbanded during the summer over concerns that its hyperaggressive approach had left the NYPD’s relationship with communities frayed.

A newly formed unit would focus its attention in much the same way it did before — on getting guns off the street — but Adams said he would weed out cops with a history of being overzealous.

Adams also plans to put cops working desk jobs on the street and fill the posts they now occupy with civilian workers. Detectives and other cops assigned to low-crime neighborhoods would also be shifted to hotspots when spikes in crime occur in those areas.

“The prerequisite to prosperity is public safety, and we must be laser-focused in addressing the crime surge — especially shootings and violent crime,” he said. “We can get crime back down by simply using our resources better.”

Garcia, who served under Mayor de Blasio as sanitation commissioner and in Mayor Mike Bloomberg’s Department of Environmental Protection, wants to expand the footprint of statistical analysis to determine how to improve violence interrupter programs and get a better understanding of how cops interact with the public in ways that are often ignored but can lead to building trust.

Areas that warrant further analysis could include looking at what the Police Athletic League is doing, or the number of tenant association and neighborhood meetings officers attend.

“The public needs to feel that you have a handle on what the problem is and that you have a plan to address it and that you’re not totally reactive,” she told The News. “As the mayor, you can’t tell people they don’t feel afraid because that’s how they feel. You can’t tell someone they’re wrong about their feelings. You have to take that in. That is real, and you have to put in place measures that make them feel more secure.”

Garcia stopped short of saying she’d like to see more cops on the street, but she’s also not looking to reduce the NYPD’s ranks. Police visibility, and where police are visible, she suggested, will also be important tools in cutting crime moving forward.

“We need to have cops visibly out there to deter crime, but you have to at the same time be looking at the drivers, the underlying drivers — lack of access to jobs, housing, food, education,” she said. “We need to make sure that we’re doing both at the same time.”

Stringer, who as comptroller serves as the city’s top fiscal watchdog, said he would put the “most effective” officers and detectives in high-crime precincts, but he has no intention of reconstituting the anti-crime unit.

He intends to increase the number of violence interrupters working with at-risk people and would apply data collected by the NYPD and other agencies to better identify those individuals.

“We have seen proven results from Cure Violence programs in Brownsville, Crown Heights and Jamaica, and I would devote an additional $28 million to expand them,” he said. “We need more research and data going forward, but there is real evidence from both New York City and other jurisdictions that well-structured and resourced violence interruption programs with strong oversight are effective.”

Improving the NYPD’s clearance rate on unsolved cases would also be a priority that Stringer says he’d address through the “strategic deployment” of detectives to Black and Latino neighborhoods.

When asked how she would deal with the increase in murders the city has witnessed, Morales, a former nonprofit executive, said she wouldn’t bring back the anti-crime unit, but would push to “identify safe spaces to address homelessness” and launch an effort to connect vulnerable New Yorkers to resources they need through a dignified and culturally responsive manner.

She also plans to place much more emphasis on violence interrupter programs, pointing out that they don’t receive “anywhere near the NYPD budget.”

“They are much more effective in responding to community violence, as well as social and human service outreach,” she claimed. “This is why I’m calling for a fully funded Community First Responders Department unit outside of the NYPD and the hiring and training of professionals truly equipped to handle the majority of mental health and emergency calls that go to 911.”

McGuire, a former Citigroup executive, plans to expand CompStat to focus on areas where it presently doesn’t, including measuring the success of deescalation techniques and police responsiveness.

He intends to beef up the number of cops tasked with getting guns off the streets to combat spikes in murders and shootings, and described the battle against gun violence as requiring a “top-to-bottom approach.”

“First, we need to expand community policing so that officers establish a rapport with the people they serve in order to more readily identify where the problem areas are, and who needs to be looked at most closely,” he said. “Second, we need to make ShotSpotter a citywide effort, so that anytime a gunshot is recorded, law enforcement can save vital minutes in tracking down its source.”

Wiley, a former MSNBC commentator who also served as de Blasio’s legal counsel, said she would move the NYPD away from “containment and control” policing, which leads to unconstitutional stop-and-frisks, and make community- and problem-oriented policing the model.

“Eric Garner lost his life because he allegedly sold an untaxed cigarette. A community- and problem-oriented approach would have worked with storeowners, who were complaining, and also other agencies to address what was happening and how to find solutions that did not require an arrest,” she said.

“Too often the NYPD responds to problems of poverty, not of crime. We need to ensure that if the NYPD receives a call about a poverty problem, the right city agencies are involved and the NYPD is not.”

Yang, who leads in the polls and gained widespread name recognition during his 2020 presidential run, said he views crime as a key impediment to slowing the city’s recovery from COVID and fiscal malaise.

Before the recent A-train stabbings, he called for more cops to be assigned inside the subway system, but said he’d also like to see police presence beefed up immediately outside transit hubs.

“If we’re going to get New Yorkers back on mass transit — and eventually back to the office and out to establishments that need New Yorkers’ business — we need to ensure their commute to mass transit is just as safe as when they’re riding it,” he said. “That’s why I want at least as many cops aboveground, patrolling the areas within a few blocks of subway and bus stops.”

Yang is open to the possibility of reconstituting the anti-crime unit as long as it doesn’t lead to “the type of mistrust that ultimately damages public safety.”

Donovan,who served as President Barack Obama’s budget director and housing and urban development secretary and oversaw housing under Bloomberg, said increased policing would not solve systemic problems like the absence of opportunity and cycles of trauma.

Like many of his opponents, he wants to see the NYPD stripped of current responsibilities such as policing schools and responding to mental health calls — and focused on violent crime.

He also plans to lean on his connections in President Biden’s administration to stem the flow of guns into the Big Apple.

“To reduce the prevalence of illegal guns on our streets, the Donovan administration will make closing the out-of-state gun pipeline a top priority and target police resources accordingly,” he said. “My administration will also emphasize effective collaboration between police, the Mayor’s Office of Criminal Justice, courts and district attorneys to ensure that gun cases are resolved rapidly and fairly.”