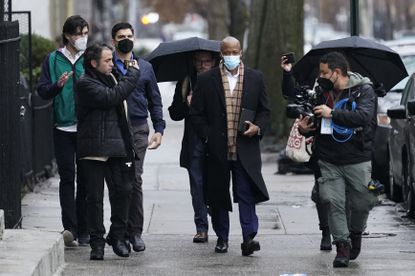 His first day on the job is done — and it was a doozy.

Eric Adams, New York City’s newly-minted 110th mayor, kicked off his Saturday morning waiting for the J train with a call to 911 after witnessing a fight. He gave his first speech to New Yorkers as mayor — remotely from City Hall’s Blue Room. And after that, he headed to New York-Presbyterian/Weill Cornell Medical Center to check on a cop who’d been shot earlier in the morning.

But Adams — just hours after being sworn in at the Times Square New Year’s Eve ball drop — appeared well rested and exuded hope, even in the face of a resurgent COVID-19 pandemic, rising crime and what he has called the city’s dysfunctional government.

“We will get our city back by making a commitment to each other, right here, right now, beginning today. This will be our New Year’s resolution: we will not be controlled by crisis,” he said. “We will make this city better every day through actions big and small. Getting vaccinated is not letting the crisis control you. Enjoying a Broadway show. Sending your kids to school. Going back to the office. These are our declarations of confidence that our city is our own.”

Adams, 61, started his day early — in marked contrast to his predecessor Mayor Bill de Blasio, who was often criticized for arriving late to City Hall — but that was not the only way he set himself apart.

Adams took the train to work — a move that appeared designed to differentiate him from the now ex-mayor — and said he intends to take the subway “often.”

While standing on the platform, he witnessed a violent confrontation on the street below. And since he was not accompanied by a police detail, he called 911 to report the fracas.

When asked why he didn’t have an NYPD detail with him, Adams laughed.

“Grandma doesn’t have a detail. So, if the city’s safe, we should have just a limited amount … of police personnel,” he said. “If Intel tells me there’s a credible threat, we’ll make sure we have the appropriate amount.”

He later pointed out that he was not carrying a gun with him to work — something he suggested he would do while he was campaigning for mayor. He didn’t rule out using a security detail though, and indicated he’d travel with a pared down unit or none at all moving forward — a departure from de Blasio, who was slammed in a recent city Department of Investigation report for misusing his NYPD security team.

During his City Hall speech and at his q-and-a in Queens, he ticked off some promises and goals, and touched on how he says being beaten by police as a youth inside the 103rd Precinct stationhouse changed him and his path forward.

“This experience here had a major impact on me becoming a police officer,” said the former NYPD captain. “I turned that pain into purpose. I was able to become a captain, and I’m able to come back here today in front of the same precinct. It’s an American story.

“Today the demon is off my back,” he added.

And while he did lay out some promises, he also wasn’t heavy on specifics when it comes to his immediate policy goals.

In his speech, he promised to make “city government better every day,” and later said he would revisit a proposal to allow non-citizens to vote in city elections — a measure passed by the City Council, but not signed into law by de Blasio.

“We’re going to look at the bill,” he said. “One part of the bill I’m concerned about — the 30 day part — if someone is in the city for 30 days, they have the right to vote. That’s problematic to me. I understand the importance of local elections, but to give that power to someone that’s here for 30 days, I think that’s a problem.”

The theme of his first 100 days will be “GSD — get stuff done,” he said, but when asked what concrete goals he aims to accomplish within those 100 days, he wouldn’t lay out anything very precise.

But as of Saturday evening, City Hall still had not released a plan.

One top priority will be wrapping his head around the city’s COVID-19 situation and he vowed to have something solid ready by next week.

“I want to make sure we have a real plan in place for Monday,” he said.