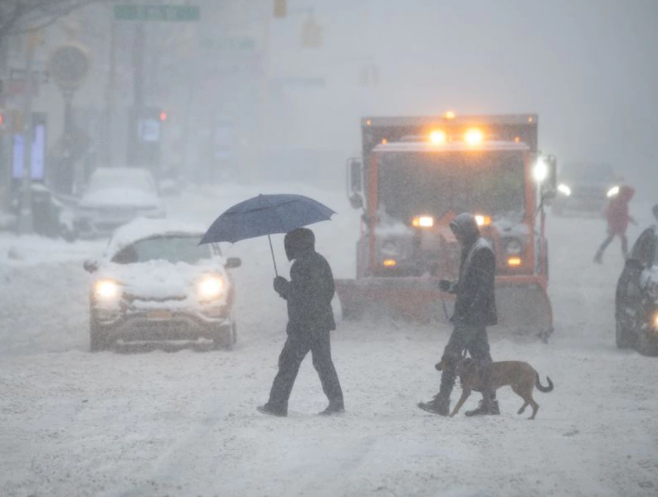 Bundle up and stay home!

The mayor, however, was on the road, tweeting an update from the Bronx.

“I’m up in the Bronx on Tiffany St. The roads are slippery out here today,” said Adams, wearing a blue coat, the collar turned up and a red and green scarf as cars rolled through the snow and the slush behind him. “It is best to be off the roads and let DSNY clean the streets.”

“Be careful, bundle up. It’s a good day to stay home if you don’t have to go out,” he advised.

On the ground in the Bronx. It’s a good day to stay home if you don’t have to go out! pic.twitter.com/mFEqJpQpq0

By 9:45 a.m., heavy snow, buffeted by 50 mph winds, were blowing across the city. Between 6-12 inches of snow was expected in the city’s biggest storm this winter. Parts of Long Island were expected to get hit with well over a foot of snow.

In an interview on 1010 Wins, Adams said the city was handling the storm “very well.”

“I am just so impressed on how this city is,” he remarked. “It is just a well oiled machine with city employees. They know what to do know and they know the plays we must call. Through our combined efforts we are going to ride this storm as smoothly as possible.”

As the storm blows through the city, first responders were ordered to move any unsheltered people they find out on the street into hospitals and homeless shelters, Adams said, underlining the need for people to remain at home if possible.

“If you’re stuck on the road, you are preventing our emergency vehicles and trucks do do what we have to do — to get the roads clear so we can respond to emergencies,” he said.

Adams praised the response from city workers out in the cold and snow.

“This is a complicated city but we have the tools and we have the personnel and man power that they’re professionals and my goal is to just continue to desilo our city and give it support to those men and women on the front line that want to make sure tax payers are getting their money’s worth to get things done in the right way,” he said.

Adams also joked that he intends to put a list together on the city’s website of great places to go sledding.

The National Weather Service issued a winter storm watch for much of the tri-state area starting Friday evening and lasting through Saturday night.

Meteorologists predicted that southern and central Queens, and Long Island, would bear the brunt of the storm.

Gov. Hochul was expected to hold a briefing on how the state was bracing against the storm at 11 a.m.