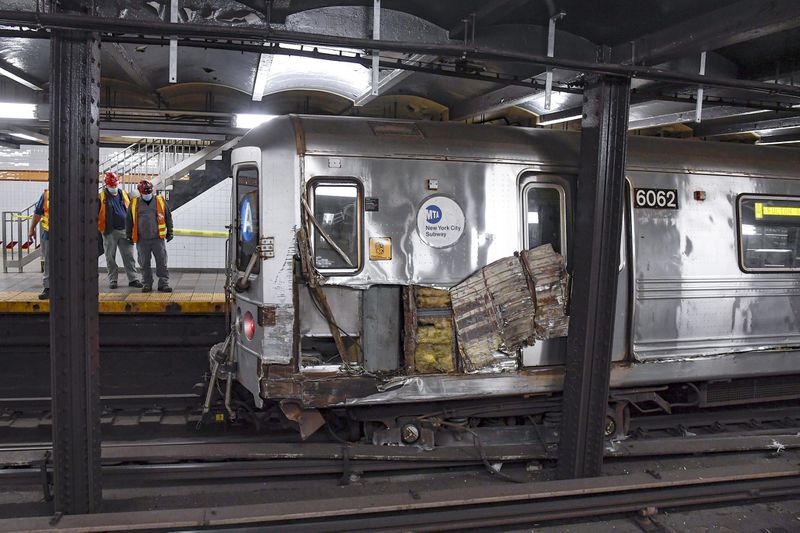 The uptown A train was about 50 feet into the 14th St. station in the West Village when it ran into the metal tie plates, also known as D plates, at 8:14 a.m.

Three passengers suffered minor injuries. One refused medical attention, another was treated at the scene and the third was taken to Bellevue Hospital for further treatment, officials said.

The plates are normally used to secure tracks to the roadbed. Police sources said the ones thrown onto the tacks had been left behind by Metropolitan Transportation Authority work crews.

The alleged saboteur, Demetrius Harvard, 30, of the Bronx, tossed them onto the tracks, but a bystander leapt onto the roadbed to clear the debris before the train pulled in, a police source said.

Harvard — who has an extensive criminal history — was undeterred. He threw more clamps just as the A train roared into the station, the source said.

Commuters saw the suspect laughing at the disaster he unleashed, sources said. Good Samaritans held him at the station until cops took him into custody.

Police brought Harvard to NYPD Transit District headquarters at the Canal St. station on the A, C and E lines for questioning. He was later charged with reckless endangerment, criminal mischief, assault and criminal trespassing, cops said.

Police and Metropolitan Transportation Authority investigators recovered a rail plate believed to have derailed the train in the tunnel just south of the 14th St. station, according to an internal incident report obtained by the Daily News.

The brazen act caused one of New York City’s most catastrophic train derailments in years.

The train’s first two wheel sets were thrown from the tracks and the front car slammed into four structural pillars, causing its metal siding to peel back like a can of anchovies and its front three door panels to be damaged.

MTA workers have been told in the past not to leave construction materials near tracks or in reach of straphangers, police sources said.

But MTA chief safety officer Pat Warren asserted the agency’s employees were not to blame for the derailment, which caused extensive train delays across five different subway lines.

“We’ve ruled out that this was any malfunction of our equipment or any inappropriate action of our crews,” Warren said at a press conference Sunday. MTA officials said the rail plates that appeared to derail the train were stored in a secure, nonpublic area. The MTA also stores the plates in subway tunnels, officials said.

First responders evacuated about 135 people from the train, who were all able to exit onto the station platform, police said.

The derailment tripped a breaker that cut the power on the uptown express A train tracks between Canal and 34th Sts., stranding another train in a subway tunnel just south of Penn Station with about 125 people on board, transit officials said.

Those riders were saved by a rescue train the MTA dispatched onto an adjacent local track. Transit crews set up a metal emergency bridge plank so the stuck riders could move onto the working train.

Harvard is not suspected of any previous derailments, but has a litany of arrests both in and outside the subway system, according to police sources.

Counterterror units in the NYPD conducted an investigation but do not believe the act was linked to any type of protest or terrorism, sources said.

Service on the A and C lines was suspended in both directions south of 14th St., and uptown service was knocked out from ‌Canal St.‌ to ‌59th St-Columbus Circle. Rerouted trains also caused headaches for E, D and F train riders throughout Sunday morning and into the afternoon.

By 3:30 p.m., A trains were running on local tracks in both directions in Manhattan with “extremely limited service” and were bypassing the 14th St. station, said MTA spokesman Aaron Donovan. Service on the C line remained suspended entirely.

MTA crews had to wait for police to complete an hours-long investigation of the crime scene before beginning extensive repair work on the tracks that was slated to last through the night.

Jezycki, the NYC Transit subway chief, said he hoped to restore full service on the A line by Monday morning’s rush hour.

Crews had to use a diesel locomotive to tow the derailed subway train to a maintenance yard for repairs and further inspection. Workers also have to replace the large stretch of damaged and destroyed third rail and track components as well as make repairs to structural pillars.

“This was an all-hands on deck emergency with transit workers from multiple divisions responding to assist riders and then begin repairing the extensive damage,” said Transport Workers Union Local 100 President Tony Utano. “It’s a stark reminder that the MTA can’t cut its frontline workers even if the federal government fails to provide funding in a COVID relief package.”

Subway derailments are rare — and few cause as much damage as Sunday’s.

A track derailment in July 2017, caused by a rail improperly attached to the road bed, hurt 39 straphangers and cost the MTA $3.4 million. That catastrophe occurred during a summer when subway delays became so problematic that Gov. Cuomo launched an $836 million “Subway Action Plan” to rapidly repair the system.

In September 2019, an F train with roughly 195 straphangers aboard jumped the tracks beneath Hillside Ave. in Jamaica, Queens. That train ran over a mat that covered the electrified third rail during construction that was forgotten by workers.