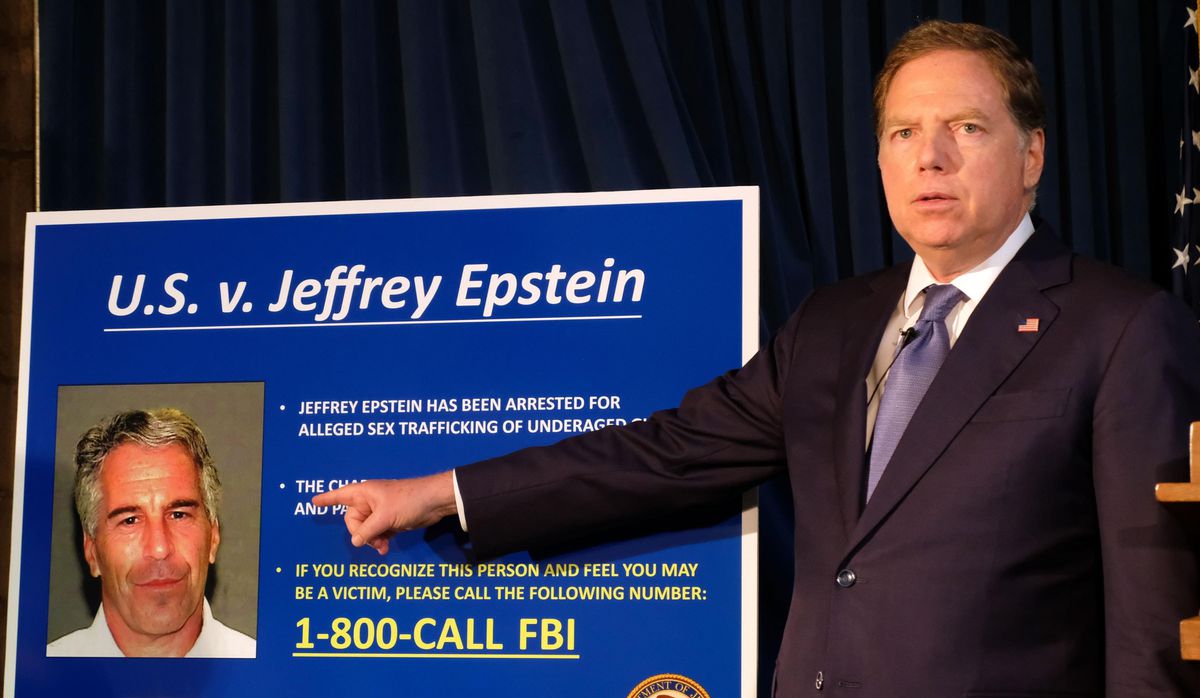 In July 2019, then-Manhattan U.S. Attorney Geoffrey Berman proclaimed before a phalanx of cameras that the feds were “proud” to stand up for Jeffrey Epstein’s victims.

“My office will not rest until perpetrators of these types of crimes are brought to justice. Victims’ voices, including the many voices of Epstein’s alleged victims, must be heard,” Berman said.

It wasn’t always that way.

On Feb. 29, 2016, the office’s top human trafficking prosecutor, Amanda Kramer, met with defense attorneys representing victims of Epstein and his alleged madam, Ghislaine Maxwell, sources tell the Daily News. The attorneys urged Kramer to open an investigation of the duo. But Kramer had many questions, including how Epstein’s controversial non-prosecution agreement with the Southern District of Florida in 2007 would impact a new investigation, the sources said.

The attorneys attempted to pique Manhattan federal prosecutors’ interest in a second meeting in the summer of 2016 after Maxwell allegedly committed perjury, two sources said. The sources said a second meeting occurred, but another source familiar with the outreach to the government insisted it never happened. Epstein was paying Maxwell’s legal bills at the time and the victims’ attorneys believed the pair were in a perjury conspiracy, sources said.

“We were saying to anyone who would listen: We’ve got clients who were abused. Some of them were underage. We have the evidence. There’s a whole record that’s been developed. We can establish beyond any reasonable doubt there was a massive sex trafficking ring going on,” said David Boies, an attorney for Epstein victims.

The Manhattan U.S. Attorney at the time, Preet Bharara, was not aware of the meetings, The News confirmed. It was unclear how far up the Southern District’s chain of command the proposal went.

“We never contacted Preet directly. We thought he would have been briefed on a matter of this importance. And we hoped to make progress with the staff, and didn’t want it to be seen as going over their head. But in retrospect, we probably should have gone to him directly,” Boies said.

The Virgin Islands Attorney General has accused Epstein of bringing underage girls to his private island of perversions as recently as 2018.

A person closely familiar with the Southern District emphasized that understanding of the Epstein saga was radically different before the Miami Herald published its bombshell investigation in late 2018. The story raised major questions about why then-Southern District of Florida U.S. Attorney Alex Acosta let the perv off so easy. Reopening a case brought by another U.S. Attorney is rare, the person said.

“You just presume that major, significant, well-respected US attorneys offices don’t f–k this up,” the person said.

“It obviously seems very tragic in hindsight. But if people (reopened) our cases we’d lose our minds.”

The sources who described attorneys’ disappointment in 2016 were quick to credit the prosecutors and FBI agents who brought the Epstein and Maxwell cases that began under Berman.

But the attorneys’ earlier efforts to persuade the feds to investigate Epstein — led by Boies, one of the country’s most powerful lawyers — will likely be scrutinized in Maxwell’s criminal case.

Maxwell’s attorneys have argued she was the victim of a “perjury trap” set by victims’ attorneys and that the feds improperly obtained her depositions, which remain under seal. Prosecutors accuse Maxwell of lying in those depositions about her knowledge of Epstein’s sick lifestyle, including his collection of sex toys and obsession with underage girls.

Her legal team will argue to the 2nd Circuit Court of Appeals Tuesday that the depositions should remain under seal.

“The deposition transcripts obtained by the government and the indictment’s perjury counts place in a new light plaintiff’s earlier litigation conduct—suggesting the planned use of Ms. Maxwell’s deposition as a perjury trap,” Maxwell’s attorney Ty Gee wrote in July.

But attorneys for Epstein victims were not in cahoots with the feds in 2016, despite their best efforts.

The team represented Epstein accuser Virginia Giuffre in a defamation lawsuit against Maxwell, an alleged madam for Epstein. The lawsuit focused on whether the British socialite smeared Giuffre’s name by saying she’d lied about Epstein’s sex trafficking scheme. But it also provided a means to obtain evidence and force people in Epstein’s orbit to testify under oath.

The legal team presented Kramer, the Southern District’s coordinator for Justice Department initiatives combating human trafficking and child exploitation, with what they’d learned about Epstein’s scheme. The multimillionaire financier had abused dozens of underage girls in Palm Beach and elsewhere during sexualized massages, they said. With Maxwell’s assistance, Epstein had allegedly created a trafficking pyramid scheme in which girls were rewarded for recruiting new underage victims.

Kramer was concerned about the non-prosecution agreement, according to sources.

“This has already been looked at,” a source recalled Kramer saying. “So what you’re really asking us to do is redo what the U.S. Attorney in Florida did?”

Acosta negotiated the agreement with Epstein’s powerhouse legal team that allowed the sex offender to dodge serious federal charges and plead guilty to state prostitution charges. The deal is a critical chapter in the Epstein saga, which the Eleventh Circuit Court of Appeals described as a “tale of national disgrace.”

A second source recalled Kramer looking for a New York angle to the Epstein scheme, which would allow him to be charged in Manhattan. But evidence that girls had endured the multimillionaire’s “massages” at his Upper East Side mansion was thin at that time, the sources said.

“Do you have cases of Epstein abuse here in New York?” a second source familiar with the meetings recalled Kramer asking.

“The answer was not necessarily — or at least not yet. We asked why can’t you open an investigation and look for them? We’ll look for them and you look for them.”

Kramer, who did not seem unsympathetic or skeptical, also asked about the statute of limitations for some of Epstein’s crimes, the sources said.

“The AUSA acted confident that a case would be brought against Epstein for crimes committed against Virginia and others in New York. Of course, first she had to have facts, witnesses, evidence, and victims of a New York crime. We assured the prosecutor that the number of victims in New York far exceeded those discovered in Florida. The group walked out excited that New York was finally going to bring a case against Epstein. I said to David and Pete, ‘Don’t hold your breath, the Southern District obviously doesn’t know who they’re dealing with yet,'” Edwards wrote in his book, “Relentless Pursuit: My Fight for the Victims of Jeffrey Epstein.”

Edwards was right to not celebrate. The attorneys didn’t hear back from prosecutors, according to sources.

The team thought they’d found a new way to entice the feds after Maxwell’s depositions by attorneys Sigrid McCawley and Boies in April and July 2016.