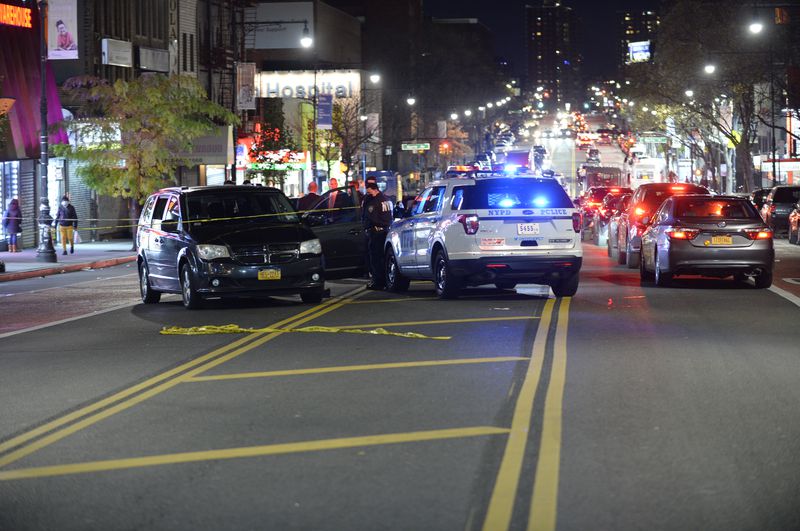 A knife-wielding assailant attacked a man and woman sitting in an SUV on a Bronx street Tuesday after an angry argument, fatally stabbing the man and slashing the woman, police and witnesses said.

The bloody episode unfolded on E. 149th St. near Courtlandt Ave. in Mott Haven about 4 p.m.

Surveillance video obtained by the Daily News shows the SUV double-parked on E. 149th St. The man can be seen arguing with the passenger for just over a minute. He then walks around to the driver’s side, swings open the door and starts stabbing the driver.

When the passenger’s door opens, the man then hustled around the front of the car and jumped in, hanging on as the car drives forward.

Cops said one of the victims, a 38-year-old man, was stabbed three times in the chest. Medics took him to Lincoln Hospital, but he couldn’t be saved.

The other victim, a 41-year-old woman, was slashed in the arm. It wasn’t immediately clear which victim was driving the SUV.

Yaxiri Mejia, an employee of nearby Asyah’ Sleep & Furniture, said the attacker and the slain man first started arguing outside a nearby liquor store.

“They were arguing and cursing at each other, yelling ‘stupid’, ‘motherf—-r’, stuff like that,” she said.

Ali Raj, the 36-year-old owner of a nearby Boost Mobile store, said he saw police cars and ambulances arrive at the gruesome scene.

“I looked outside and saw the man on the ground,” he said. “Blood everywhere. Everywhere.”

“I saw him pull him into the ambulance,” he added. “Yeah, he lost a lot of blood.”

Cops were looking into what sparked the argument, and searching for the suspect Tuesday night.