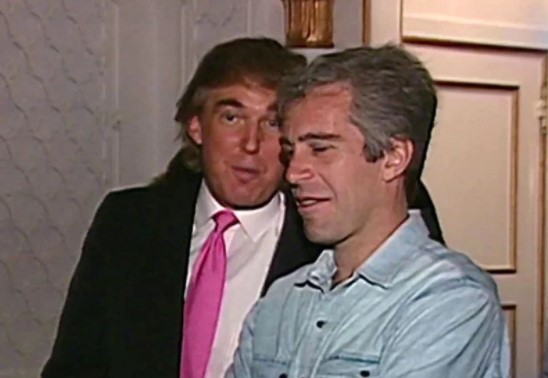 An underage victim of Jeffrey Epstein testified Wednesday she competed in Donald Trump’s teen beauty pageant in the 1990s after being introduced to the future president by the notorious sex offender.

The revelation emerged during the accuser’s second day of testimony at Ghislaine Maxwell’s trial for grooming underage victims for Epstein’s abuse from 1994 to 2004.

Jane told the jury that she competed in Miss Teen USA shortly after meeting Trump with Epstein at Mar-a-Lago, Trump’s Palm Beach, Fla., resort. The Miss Teen USA pageant was organized by Miss Universe, which Trump owned from 1996 to 2015.

Trump wasn’t the only prominent man Jane met through Epstein.

“You recall Prince Andrew being on a flight?” Menninger inquired, referring to a trip on one of Epstein’s private planes.

Trump and Epstein partied in the same social circles in the 1980s and 1990s but had a falling out in the early 2000s over a real estate dispute, according to reports.

Jane testified she was 14 years old when Maxwell and Epstein first approached her at a Michigan summer camp in 1994.

The British publishing heiress’s lawyers sought to cast doubt on Jane’s credibility by grilling her on discrepancies between her trial testimony and initial statements to the FBI in late 2019 and early 2020.

Menninger asked the witness why she did not initially tell law enforcement Maxwell often contacted her on Epstein’s behalf.

“That memory has come back to you in the past two years?” asked Menninger.

But Jane’s testimony was corroborated by her ex-boyfriend, who took the stand using the pseudonym Matt. He recalled Jane sharing details of her harsh upbringing with him, mentioning a “godfather” or “uncle” type figure in her life who “basically helped her mom pay the bills,” while they dated from 2006 to 2014. Jane had testified that Epstein paid her hundreds of dollars in cash after each abusive encounter, which typically began as a massage.

Matt recalled witnessing Jane argue with her mother in 2011 over the mom’s failure to intervene in Epstein’s abuse.

”How do you think I got the money, mom?” Matt quoted his ex. “Jane told her mother that the money was not free and that there’s no way she couldn’t have known.”

Maxwell has pleaded not guilty to all charges and says the government is using her as a scapegoat for Epstein, who killed himself at the Metropolitan Correctional Center in August 2019.

Before the jury entered the courtroom, two U.S. Marshals who guard Maxwell in the courtroom allowed Epstein’s alleged chief recruiter a brief opportunity to chat with her brother, Kevin Maxwell.

With her hands crossed over her heart, Maxwell gushed in conversation with her older brother.

Standing with sister Isabelle Maxwell outside court, Kevin Maxwell said the brief chat was the first time he’d spoken to Ghislaine Maxwell in more than 500 days.

“On a personal note, it gave me a tremendous sense of relief to be close to her, to be able to actually see her in the flesh, even to be able to speak with her,” he said.

Maxwell’s brother referred reporters to the siblings’ request the United Nations intervene in the conditions of her confinement detention at the Metropolitan Detention Center in Brooklyn. Maxwell has said she’s in de facto solitary confinement and being “tortured” by the federal prison system.

Shortly before Jane’s testimony concluded, Assistant U.S. Attorney Alison Moe asked Jane about her initial meetings with law enforcement — and why she may not have been fully forthcoming at the outset.

“I was sitting in a room full of strangers and telling them the most shameful, deepest secrets that I’ve been carrying around with me my whole life,” she said.

Maxwell’s lawyers also grilled Jane about a $5 million payout she received from an out of court compensation fund for Epstein victims.

Moe asked the witness how she felt about that settlement, of which she took home $2.9 million.

The question prompted Jane to break down in tears — the only time she did so in about eight hours of testimony.

The money would never compensate for the “pain, abuse, and suffering” caused by Epstein and Maxwell, she said.

“All the out of pocket money I paid to try to make this go away, and to try to fix myself,” she said.

“Hopefully, this just brings it all to an end. And I can move on with my life.”