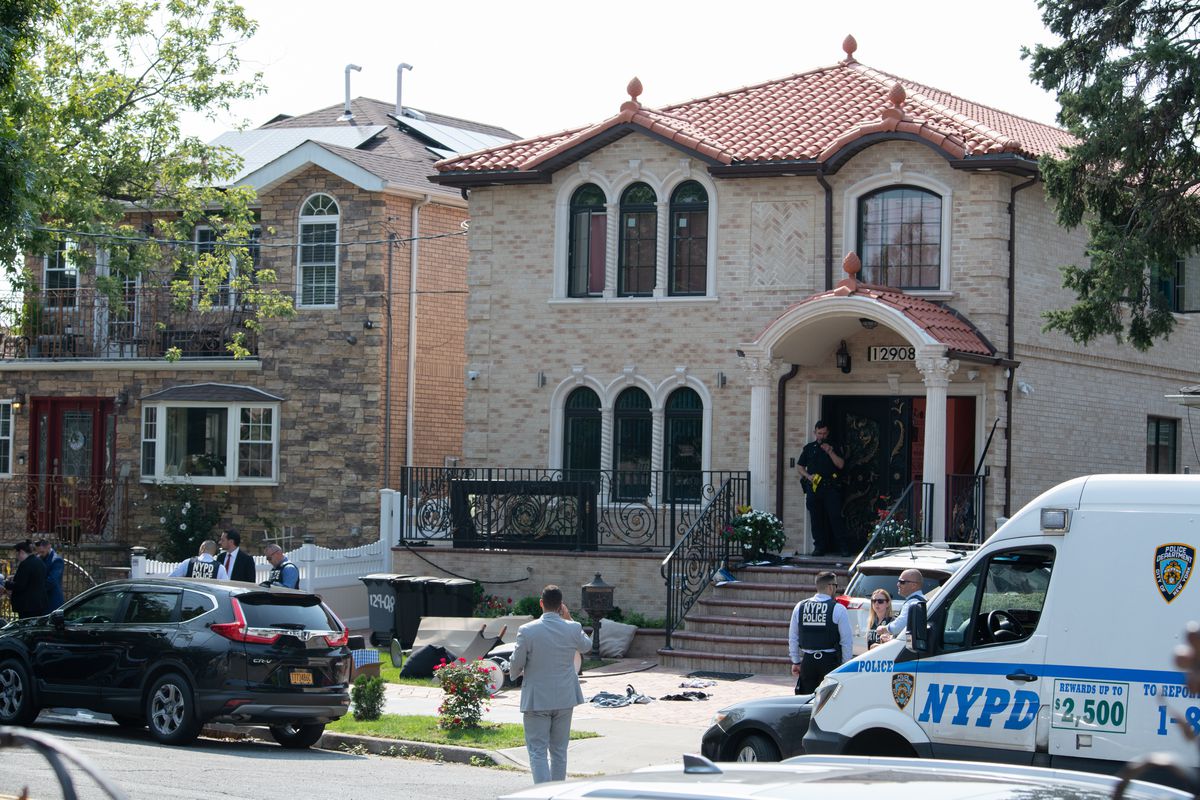 An off-duty NYPD cop dodged a bullet while leaping for her life from a second-floor window after her jealous husband grabbed her service revolver during a crazed Tuesday morning fight in their Queens home, authorities said.

The ex-con husband was shot in the arm by police after squeezing off a bullet as his spouse jumped to safety following a 911 call for help from their South Ozone Park house, police said. The lucky to-be-alive wife suffered a possible broken leg while fleeing via the window after the 8:45 a.m. confrontation, police said.

“I just need police to come to the house,” the wife says in a recording of her 911 call for help obtained by the Daily News. “He’s breaking everything in the house. Just please send the cops.”

The screaming husband, identified by sources as Marco Mosquera, 43, had accused his wife, 39, of having an affair and was aiming a gun at her chest as police arrived.

“You’re my wife!” he howled at her. “You committed adultery! You cheated on me! You made a vow!”

The wife, assigned to the 101st Precinct in Far Rockaway, can be heard addressing her spouse during the 911 call: “What the f— are you doing? Are you dumb? You’re pulling guns now?”

Cops raced to the house on 133rd Ave. near 129th St. after the 911 call. The wife, identified by sources as NYPD Officer Stacy Mosquera, at one point tells her armed husband to “try it” before asking if he wanted to get killed.

“Suicide by cop, that’s what you want?” she responds. “What, you think they got a problem busting your a–?”

“Answer the door when the cops get here,” she adds. “They’re gonna blast your f—ing head off.”

“You’re actually pointing a gun at me?” she asks him.

“You think I won’t?” he responds again.

“To my head?” she asks, breaking down crying. “Wow, you see this right? Instead of having a conversation, this is what we do?”

NYPD Chief of Department Rodney Harrison, at a news conference outside the home Tuesday, said the husband also threatened to shoot the officers who knocked on his front door.

As the wife leapt out the window, “the male involved shot in the direction of the female and the uniformed personnel,” said Harrison. “Officers returned fire, causing the suspect to retreat … the man involved sustained one gunshot wound to his right arm.”

The husband, after speaking with hostage negotiators and a relative, came to the front door and surrendered after a nearly two-hour stand off. He and his wife were taken to local hospitals.

He spent nearly three years in prison for weapon possession beginning in 2003, records show. His parole ended in 2010.

“I noticed cops taping off the block and then I saw cops trying to break the door down with a battering ram,” said the neighbor. “When I saw cops I immediately thought it was a domestic incident because you rarely see cops around here.”

“I heard two or three shots,” he recalled. “Then shortly after that it sounded like an automatic rifle because it was rapid fire. It sounded like they were returning fire .. It was quick, rapid fire, like 5 or 6 shots.”

“They had a hard time getting through the door — it must have been a strong door.” said Chanderdatt. “They hit it with a battering ram first. Then more trucks and ESU came and it sounded like they were using a saw.”